Home » Occupy » Being Heard Without Saying a Word 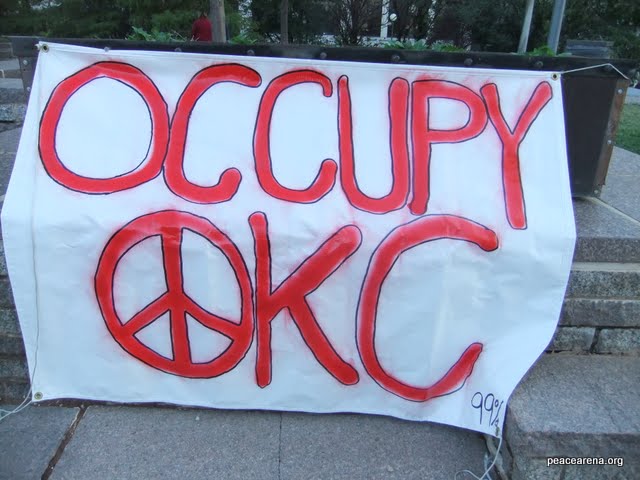 Being Heard Without Saying a Word

Posted by: brianschroeder November 9, 2011 in Occupy

From the moment I woke up yesterday I closely watched the weather in anticipation of glorious thunderstorms to wash over Central Oklahoma. Unfortunately, the storm I had been tracking was slow moving into Oklahoma City but was active none the less. The news reported of a tornado touching down in the southwestern part of the state in the late afternoon. Along with three earthquakes in two days, a tornado is just what the state needed.

At the end of the workday, I grabbed my bag and walked out of my office in a quick-paced walk towards my bus stop, located within the few blocks of skyscrapers that make up downtown Oklahoma City. The ominous grey clouds were still threatening rain, but through the darker grey storm clouds I could see faint hints of blue and orange sunset shining light on the dismal storm that had brought destruction just hours previous.

As I approached Main St, I noticed there was construction blocking the sidewalk I normally take. I decided to walk one block north and take an alternate route. As I walked past the Chase Bank building headed towards my destination in front of the Bank of America building, I caught a glimpse of a tan and green tent down a side alley. I diverted my path down the alley that eventually opened up to a small settlement of 10 – 12 tents occupying Kerr Park, a concrete getaway in the middle of downtown. Less than a dozen people donned in rain jackets walked from tent to tent, as though they were spreading weather updates or other vital information through their small community. Along the perimeter of the small encampment stood a cardboard sign that read, “I do have a job, and I protest Wall Street.”

I immediately took out my phone and thought I would post a photo on Facebook in support of the Occupiers, but unfortunately the breaking dusk brought the already dark sky darker. A well-dressed woman wearing enough makeup for two approached me and asked, “What is that?” I replied,” It’s the Occupy Oklahoma City movement.” She gave a snickered smile that suggested her assumptions about the “bum tent city” were correct, and then walked away.

I continued down Park Ave. towards my stop and began thinking about how I feel like there is more I should be doing to support the Occupy movement. I have witnessed the handful of Oklahoma City Occupiers parade around the few blocks of corporate offices downtown while I wait for the afternoon bus, and it always put a smile on my face. However, like the person who posted the sign for those who pass the Occupy encampment, I too have a job where I was hired just a few months ago after graduating from college on the G.I. Bill. However, I also realized that the Occupy movement goes on even when I am not part of it. The movement goes on in 600 communities across the US, including OKC. I realized I don’t have to be in Zuccotti Park, Oakland, Boston or Washington D.C. to take part in the democratic movement that is steering our country on a new course. There is action being taken blocks from where I work and it has been going on for weeks.

As a former soldier, I take solace in knowing there are those who remain vigilant in fighting for the cause, despite tornadoes or recent earthquakes. Hearing voices that are showing me what democracy looks like, while watching signs bob up and down in rhythm with foot stomps on the ground give me comfort in knowing somebody is in the trenches fighting for me.

Out of the 2,500 Facebook likes of the Occupy OKC page, there are only a handful of watchful, dedicated solders for the cause out on the front lines every day. I then realized that although the path my life has taken did not lead me to be an Occupier, my thoughts, actions, and daily decisions reflect those of an Occupier. I cannot march and have my voice heard, but my daily actions can be just as loud. I must remain vigilant in promoting change through peace and understanding in my daily conversations with others. I must be a conscientious consumer and try my best within my means to support my local economy by being mindful of where I shop, what I buy and where my purchases come from.

As a veteran, I feel a responsibility to the country for which I risked my life. As a citizen, I have a responsibility to take pride in where I live and actively promote a fair and just society, not only for myself, but also for my neighbor. The military cannot operating on infantry alone and expect long-term results, and neither can the Occupy movement. Take action in your own way to support what you believe and having your opinions represented. If you cannot be a foot soldier, then use your skills, talents, business connections or your own individual choice to support what you feel is the right thing. The unheard majority can display the same amount of conviction as the vocal minority, but through actions rather than words will their voices be heard.