Home » Occupy » Cartoons of the Occupation 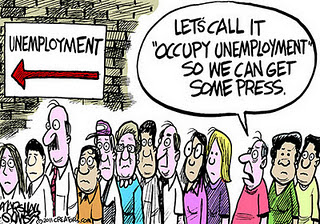 Posted by: karololesiak November 9, 2011 in Occupy

I just finished looking at the U.S. News and World Report articles covering Occupy Wall Street and as I have watched various trolling and making fun of the protesters, I am saddened with how cruel humans can be to each other. The political cartoons themselves are comparable to xenophobic cartoons before the great wars.  Some of the trolling, I think, is being funded by various special interests.

It amazes me that one can make money as a rent-a-troll these days but unemployment for some states is teetering on unprecedented. I can only compare the anger I am feeling to watching old footage from the civil rights movement sit-ins where citizens were spitting and beating black people who were occupying the whites-only section. I mention these comparisons because race is the one thing that I’ve seen people get that excited about, that cruel to each other about. To prove my point I need only point out that the most effective speakers of our century have been Dr. Martin Luther King, Jr. and Adolf Hitler.

We are on the brink of class war and I see a focus on the misguidedness and hygiene of the protestors. This is an obvious rouse to sidestep the issue of class. I must implore all of you to question your news sources. Ask yourself if you’re staying current events or current opinions you can later stump your friends with. Some of you have already made up your mind about the issue of class but I implore you again to ask yourself if that is your opinion or someone else’s that you’ve never questioned.

It should be a clue that the negative coverage uses the word dirty over and over. This is a hallmark of xenophobia in group psychology. The issue of sanitation has been raised over and over in protest of the protesters.

We as a people, like many other people through history, are party to a grand social experiment. Every government and its ideology is just that, a social experiment. I have heard a lot of “that’s just the way it is” from various authoritarians through the course of my life. But that was a lie too. At any given point we can decide that we just plain don’t want to play anymore. End the experiment. All that it requires is for each and every one of us to decide to not participate.

I’m sure there are a million ways one can talk oneself out of passive resistance but this might be the only chance any of us will ever get. If I have one regret it is not hitting the streets almost a decade ago when a fraudulent election lead us down a path of self-destruction. So should you! Shame on us for allowing this to spiral out of control. Making all of us worse people, making us all cruel. We can’t fix all the wrongs that have been done but we can decide to start over.

I am not proposing anything in particular, just that each and every one of you question cruelty where you see it. These cruel opinions about the poor wanting handouts demean the speaker and the listener. Every nation state in history has been afraid of its poor. If they weren’t they weren’t a nation state for long. We forgot that here. Mark my words, beautiful revolution now or inevitable bloody revolution later. Rogue elements are just waiting to hijack Occupy if it becomes disillusioned.

Next: The Death of Democracy