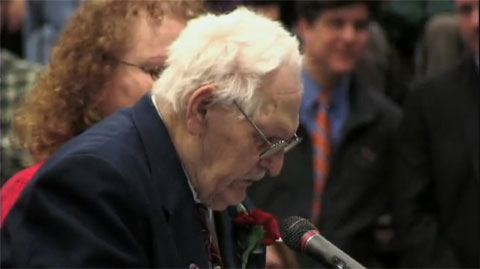 Philip Spooner is a WWII vet and a born and bred republican. His speech on gay marriage became an Internet sensation. When veterans speak in this country people listen. It’s a responsibility never to be taken lightly.

Good morning, committee. My name is Phillip Spooner and I live …in Biddeford. I am 86 years old, a lifetime Republican, and an active VFW chaplain. I still serve three hospitals and two nursing homes, and I also served meals on wheels for 20 years. My wife of 54 years, Jenny, died in 1997. Together we had four children, including one gay son. All four of our boys were in the service.

I was born on a potato farm north of Caribou and Perham, where I was raised to believe that all men are created equal, and I’ve never forgotten that. I served in the US Army 1942-1945 in the First Army as a medic and an ambulance driver. I worked with every outfit over there including Patton’s Third Army. I saw action in all five major battles in Europe including the Battle of the Bulge. My unit was awarded Presidential Citations for transporting more patients with fewer accidents than any other ambulance unit in Europe, and I was in the liberation of Paris. After the war, I carried POWs back from Poland, Hungary, and Yugoslavia, and also hauled hundreds of injured Germans back to Germany.

I’m here today because of a conversation I had last year when I was voting. A woman at my polling place asked me, “Do you believe in equality for gay and lesbian people?”

I was pretty surprised to be asked a question like that; it made no sense to me.

Finally I asked her, “What do you think I fought for at Omaha Beach?”

I have seen so much blood and guts, so much suffering, so much sacrifice. For what? For freedom and equality. These are the values that make America a great nation, one worth dying for.

I give talks to eighth grade teachers about World War II, and I don’t tell them about the horror. Maybe I have to invite them to the ovens at Buchenwald and Dachau. I’ve seen with my own eyes the consequences of caste systems, and it makes some people less than others, or second class.

Never again. We must have equal rights for everyone; it’s what this country was started for. It takes all kinds of people to make a world. It doesn’t make sense that some people who love each other can marry and others can’t, just because of who they are. This is what we fought for in World War II, that idea that we can be different and still be equal.

My wife and I did not raise four sons with the idea that three of them would have a certain set of rights, but our gay child would be left out. We raised them all to be hard-working, proud, and loyal Americans, and they all did good.

I think if two adults who love each other want to get married, they should be able to. Everybody’s supposed to be equal in this country. Let gay people have the right to marry.

Previous: No Movement in Movement
Next: So What Exactly is Occupy Wall Street?