Home » History » The Death of Democracy 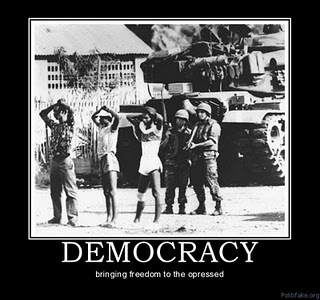 Posted by: karololesiak November 9, 2011 in History

As the imminent fall of the birthplace of democracy looms on the world stage, it is important to keep in mind that it was not democracy that orchestrated its crash. It was the neoliberal banking practices perpetuated by the belief in hyper-capitalism as a world end game. That, due to the end of the Cold War, the West’s victory, and the collapse of communism — capitalism in its purist form was a winner. We laughed at Fukuyama when he said that “history had ended” but, maybe, it was the dialogue that ended. Maybe, we needed to have different versions of history so we could match them up later. History is not a football game with winners and losers.

The security minded stance of winners and losers in the narrative of history puts blinders on the eyes of those that participate in democracy. These two ideologies seemed unmarriageable, but through the twenty years we have had minus the Red Scare, the deficiencies in pure capitalism have made themselves apparent. There are no winners and losers because the losers are always the disenfranchised. Democracy depends on those who participate in it to be equals. In this country, that equality was envisioned as land ownership (and there was lots of land that made this possible).

When the recent crash tipped the balance of that voting equality, by rooting citizens out of their homes, they tipped the scales in favor of the corporate entities that were now in procession of those domiciles. Even if the corporations do not receive voting right with the deed to a foreclosed house, the voting rights of the voting family had been severely injured by the transference. Any government who knowingly allows this is not a democracy. A nonentity cannot disenfranchise a citizen in a democracy.

The paradox in an egalitarian system is that the absolutist is also an equal. Over time an egalitarian system allows for fascists and absolutists to gain control. At the turn of the century, and in its middle, the American government took measures seeing that corporations had become these amoral entities. These measures were reversed making the mere possibility of democracy a farce. The Internet at last provides for the utopian dream of direct democracy. If given the opportunity in a direct vote, I predict that the people of this country and the world would vote to expand education and end violence (which is more than I can say about our representatives).

If a direct democracy was installed then the people of this country would vote to prosecute fraud. Perhaps, the offices of the representative demagogues of our intellectual past have become obsolete. That is why they fight so hard to make us think that they are important. Who are we voting into office anyway? People we would like to have a beer with? Attorneys have the most experience with legislation. However, much of that experience is in bending the law in argument. Not sociologically engineering legislation for the benefit of the majority. Think about what that says. The birthplace of democracy is dead. And what killed it?

I am not an expert, but I am a product of it. My grandfather fought on the Marxist side of the Civil War in Greece between 1946 and 1949. That is not saying that he was a communist. The label given to the opposition, from the Cold War intelligence backed “winning” team was just that, a label. The opposition was made up of a myriad of small groups. Which one my grandfather belonged to eludes me. There are two versions of history. One is told by victors of the Cold War and it involves the West saving Greece from the USSR’s influence. The other says that the Marxists lost because of the overwhelming British and American CIA backing, of the so-called Greek Democratic Party. Both versions of this history make democracy secondary to economics. This, in the nation state, founded of the best ideas that any state has ever had, democracy. Having just said what I have said about egalitarianism and democracy, I must ask that the reader ask the question: Was democracy served? After the Second World War the Soviets also overlooked democracy in the face of protectivist ideology and held what they called an election in Poland. It was not that either ideology couldn’t have prospered and produced a favorable result. It was the constant tampering with democracy that disillusioned the masses into a lull that seems to have just ended.

The irony being that the reason why my family came to the United States from Poland was to escape the mess communism had become. As I sit here at my desk overlooking the New York skyline at the age of 33, I have the ability to remember standing in a ration line as a child under martial law in Poland. I have served in desert wars for what was the pursuit of greed and not the pursuit of democracy. I find that anyone who is too certain about their political ideology is a zealot and should not be trusted. In fact, using a political ideology in place and/or alongside a religious one is pure lunacy. Using democracy as a cape to shield true intentions of neoliberalism is about the most antisocial thing that I can think of. One cannot help but to conspiratorially align these functions with influence of special interests and the military industrial complex because a real individual would find that immoral.

But besides all that, as we find ourselves having the veil of the fog of history lifted, we must disown our zealous hold on any ideologies that do not allow for open dialogue. You won’t meet too many Marxists from Eastern Europe, but at this point I see that both sides were crazy. They put ideology first and democracy second. Capitalism and socialism are secondary discussions to democracy. The “winning” of capitalism is about to cause the metaphorical and literal death of democracy. Neither side practiced real democracy, but the end result of these feuding ideologies have produced the flight migration of my grandfather, and the flight migration of my family to this wonderful country. In other words, it has produced trauma in the same people both systems are supposed to empower. But it has also created a way that the whole world can communicate. To make sure that real democracy can exist. If we saw two kids fighting on the playground about who was better, we would not join them. We would mediate the dispute with reason. Since the Cold War has been over for twenty years, I hope it is safe to say this without putting myself in a certain group. But I would like to be the guy who doesn’t join either of these kids. Who tells them that they both have good points? History is emerging as a synthesis of these ideas in practice; but people still want to treat men like Adam Smith and Karl Marx as religious figures. That is, simply, because it is always easier to join a group than do what we all know is individually right.

It wasn’t property ownership itself that made this country a great utopian hope that compared itself to the ancient Greeks. It was unqualified ownership of one’s citizenship. Ownership of one’s vote. The knowledge that the vote meant something. How many of you feel like your vote makes a difference?

Previous: Cartoons of the Occupation
Next: Obama’s Jobs Plan