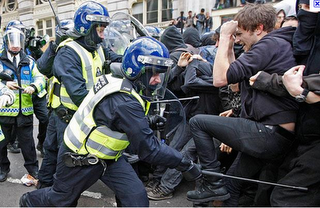 Posted by: karololesiak November 9, 2011 in Constitutional

The article linked below references the Vancouver riots and how police around the world mishandle crowds by preempting violence. Dr. Clifford Scott is the world’s foremost expert on crowd psychology. His abridged point is that the moment police start to treat the crowd made up of different individuals as a mob, it becomes a mob. The interviewer misses the point that Dr. Clifford Scott is trying to make and so do police forces around the country.

Coming out in riot gear against a crowd of peaceful protesters delegitimizes the purposes of the protesters to the the level of sports hooliganism. When freedom of speech is treated like Friday night after a soccer match we’ve got problems. Furthermore, it puts the safety of the police over that of the citizens in a lawful act guaranteed by their constitutional rights. Since preemptive measures of the state infringe so heavily on the rights provided in the social contract, I think this is a huge paradox between ideals and practice in policing certain politically motivated crowds. Democracy depends on the freedom of speech as a last result when the democratic process fails. The founders’ views of gun ownership is the same. Guns are a last means of defense against their government should it ever get out of control. I prefer the nonviolent way personally.

A more humane way to manage the absolutely necessary value of speech is to treat those practicing it as being involved in a sacred act. Which it is! My example would be the consultants that the Saudi monarchy hired to make sure that the pilgrims didn’t get trampled in the Haj to Mecca.

I mention this example not because the Saudi regime is exemplary in the area of human rights, but because this how they treat something that they consider sacred. According to our constitution our freedom of speech is a sacred and inalienable right. This is why we protect it when it comes to flag burners and racist groups. Police treat fringe groups like the KKK better because they don’t have to work to take away their legitimacy. I’m not claiming a conspiratorial view of the police being an extension of the state but they inadvertently delegitimize any movement that might threaten the power of the state. 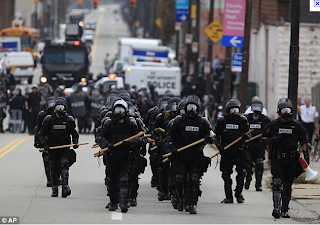 The 1st Amendment has one provision and that is public safety. You cannot yell “FIRE” in a crowded theater. By coming out in preparedness for a sports riot the police are threatening the safety of the public. In fact, historical precedent shows that in most instances the dangers to safety are to those practicing that right. There are things that we can all agree upon (or most of us). That freedom of speech is a sacred part of democracy and democracy cannot function without it. My family left Poland at the end of Martial Law and what I see here is a police state in training. Part of the problem is that city police departments are receiving military industrial complex surplus. When I was in Sacramento a couple of years back they were talking about buying spy drones. Here in New York there are 34,000 police on the street. The police commissioner was quoted implying that NYPD can shoot a plane out of the air. I don’t know about anyone else but that scares the shit out of me.

The 1st Amendment also has flaws. The framers could not have predicted the onset of video technology. When police show up in riot gear to a legitimate protest and that is caught on video it further devalues the individuals ability to broadcast, therefore making free speech null and void.