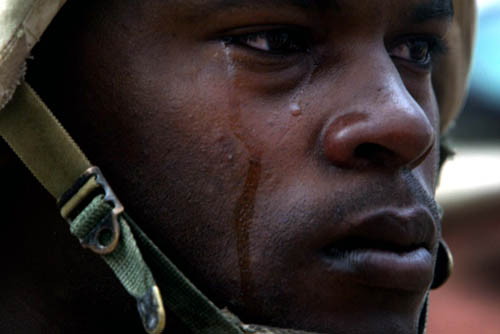 I’m built backwards. I have legs for arms, hands for feet. No, that’s not the right. I was wise beyond my years, isn’t that the term your elders use when the first signs of intelligence spark in your eyes, and the grey mush inside your skull begins to take on some form? Yeah, I think that’s it.

So the mind grew fast, and in return the body grew slow. Not that I’m a scrawny kind of fellow. But it seems like a reasonable trade; brains or brawn, you can’t have both.

It’s no use when you’re young, to try and explain God, or dispute one. Who cares what is or what might be when you’re in your primary education? Everybody is the same as far as everyone is concerned. Why cause strife? It’s better to just flow with the river than try and swim against and drown, metaphorically or otherwise.

So I played football, basketball, and baseball. The sports offered at my feeble school. The type of school where they teach you to operate within the rules of society, teach you how to survive without friction. No use in creating headstrong individuals. Better to have hands for the field. Better to follow then be trampled.

I did enough in those days not to be trampled, but I was squashed a little. “No blood, no foul,” they say on the basketball courts.

“So it’s off to college,” they told me. “You’ll do well,” they said. Not that I did all that well before I got there, high school was full of subversive rebellion and lost causes. I’m sure they all thought and still think I’ll be martyred at some point. In fact I’ve been martyred a few times; it’s not such a bad road.

College wasn’t any different than the years leading to it. So I humiliated myself. Martyrdom number one, “You see children what happens when you think for yourself,” I seem to hear coldly spoken in dark corners.

Discipline, I say to myself; that’s what I need. The military is for me. The thought at the time to bury myself in what I loathe, to cloak myself in unity. What hell to subject yourself to. I did it anyway.

I really did do well while I was in the Navy. I did things the way they wanted. I incorporated their philosophies as my own. I was doing well. I was the model, the poster child for the Navy. I had alliances and enemies. I had influence and respect, feeble forms of power.

Then I slipped up, and took the fall for some friends. I guess I knew better but that’s a story in and of itself. Yet it is what transpired afterward that opened my eyes. The brotherhood, the alliances, they were all just looking for another sacrifice to keep the masses in check. I digressed to my individualistic rebellious self. I had two years left. It was just in time, things happen for a reason I suppose.

My fall into despair would have been much more devastating had I not separated myself from the masses again. I’ve always been a people watcher, perhaps a manipulator; I know people better than they know themselves. So I thought.

I suppose the ins and outs of everything are irrelevant. Maybe not, but I didn’t go to war until I only had a few months left to go. It took almost that long to get there, but alas we arrived. Planes launched off the flight deck 24 hours a day, 7 days a week. We were killing people unmercifully, we weren’t doing it ourselves. The planes were, the bombs were. We were just there so they could.

With enough time out to sea depression sets in on a ship and its crew in rapid fashion.

Something has to be done.

Videos and surveillance came back with one of the war birds. We were forced to watch. No, I was forced to watch. It seemed like everybody else wanted to watch, they did want to. When it was over, tears built up in the wells of my eyes. The realism, the reality of being in the military never seemed to sink in; and then it did.

After watching something that tragic and horrific I wondered who in the world would stay out to sea, to stay at war. People were bombed. Green figures on infrared were gunned down by fighter jets. Blood pools were green splotches. Buildings crumbled in a green-white flash under the weight of 500-pound bombs. Trucks and cars exploded from the impact of 50-millimeter machine gun rounds. The masses cheered.

The coliseum lives on.

Walking around the ship I had to hide my face from everyone I saw. Not because of being cowardly or being ashamed. But I was appalled by the lights in people’s eyes. We were at war. We were doing our job. People were happy. The depression had fallen, I carried it for everybody.

After that night, my time I had left couldn’t come any faster and couldn’t have moved any slower. The sharp divide between me and everyone else could never have been more evident to me. All those years of rebellion came to a peak. I realized I would never be a member of the masses.

Matthew Baker is a veteran of the United States Navy and was stationed aboard the USS Ronald Reagan from 2002 to 2006. He holds a Doctorate in Education from the University of Oklahoma. Baker has worked as a reporter and photographer for The Purcell Register in Purcell, Ok, and is currently teaching English and Journalism to high school students in Norman, OK.
Previous: The Sacred Freedom of Speech
Next: The Art of Occupy

Leave a Reply to A Cancel reply