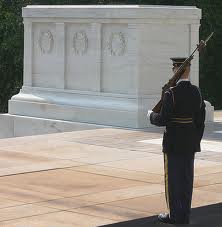 On this day meant to commemorate veterans young and old, it is imperative  that we do not let the recent improper disposal of veterans’ ashes in Virginia sully the unknown soldier’s symbolism. The Tomb of the Unknown Soldier was first erected in France as a monument to the unnamed fallen. Today one exists in almost every country in the world. With the onset of forensic science, the unknown soldier was supposed to be reduced to an artifact of the past.

I first encountered a tomb of the unknown soldier in Greece as a child. I was enthralled with the changing of the guard in Greek dress uniforms. The tassels on their pointy shoes amused me to no end. I tried to distract them from their post, but to no avail. My parents explained the metaphorical abstraction of the “unknown soldier” to me and the memorial tomb seemed like a valid expression of commemoration. It seems in Arlington Cemetery that metaphor has been replaced by the conceit of the “unhonored soldier.”

Two days before today CNN reported that until   2008, unknown soldiers’ remains in Arlington National Cemetery were callously dumped in a landfill. The “unhonored soldiers”  whose remains were dumped are grouped into the category of “unknown soldier”  by default and the lack of anyone to claim the remains.The metaphor of the unknown soldier is far more digestible to the public ear than the “unhonored soldier.” Reducing a soldier who has given his life for a perceived good to an unknown status reduces his/her sacrifice to a generality. This was necessary in the technological past. But now? How could we, in good conscience, (having the forensic science to give said soldier a name); reduce the fallen warriors’ sacrifice to an ash heap in a landfill. Most likely there were no claimants for these valiant loners, but in that case shouldn’t we all become a part of their family?

The Vietnam Veterans Memorial in Washington D.C., with its rows of names gave me a quite different feeling then the Greek monuments. I was perceiving a wall etched with names while ignoring all the teary-eyed families that had come to reconnect with a fallen member. Grouping the names together on a large slab of rock makes the names seem sequential, as if they were a part of a larger narrative. The names become less humanized and more like a name someone reads in a history book, passing it over as fabricated. An “unhonored soldier,” as a being and not an abstraction is fictitious.

Toward the middle of my tour in the South Pacific we lost a crew member aboard the ship I was serving on. He had received steam burns on most of his body and there was no medical evacuation quick enough to give him a fighting chance. The memorial was the next day and the whole crew was in attendance. The only thing I could think to myself outside of the tragedy that had taken place was that he must have been incredibly lonely in those last moments. Calling for his mom. Wishing that he could hold her one last time. And how the culmination of his plight could never be addressed on a plaque properly.

On this day, instead of thanking or saluting a vet, buy him a beer and listen to his stories. Ask about his friends. The ones you will surely not get to know by staring at the plaque. On this Veterans Day think about what it really means to be unknown or unhonored.

Previous: Out With the Garbage. Really?
Next: Class is the New Race