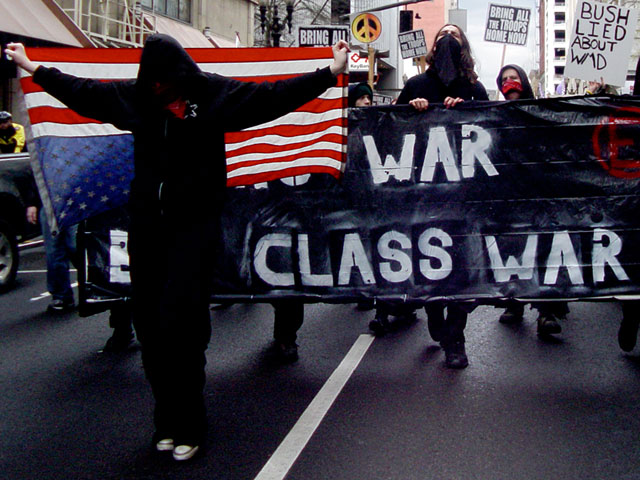 Posted by: karololesiak November 13, 2011 in Occupy

The first question the media asked when the Occupy Wall St. Movement started budding at the end of September was the racial demographic of the protesters. As if the litmus test for the legitimacy of an issue is the amount of minorities involved. This has become a real problem especially with so called liberal circles because we have been taught for so long to compartmentalize our compassion in a way that only the most deserving receive our empathy.

Nothing gets my goat more than someone who will chastise racists and in the same stroke use the word “white trash.” It is perfectly acceptable to be a raging classist in our culture as long as one avoids blatantly making it about race. Furthermore, classists oftentimes overcompensate themselves as anti-racists to create a smoke screen for the fact that poor people make them uncomfortable.

The classism that I see the most comes from the lower middle class trying to differentiate themselves from this accepted “other” (the poor). Think back to the child that was the most picked on where you went to school. He had bad hygiene. Bad manners. As children we think in qualifiers so it is easy to just think of that child as the “stinky kid.” Most likely, if you helped tease this kid you engaged in classism.

In Stephen J. Goulde’s book The Mismeasurement of Man he gives examples of how the science of the preceding generations ran with pseudoscience to address the issue of inequality. They failed at empirical logic in most instances. The approach was flawed and in the U.S. in some instances it lead to forced sterilization of lower income mothers. The conclusions that the APA (American Psychological Association) and other liberal organizations came to was that poor people are stupid and that is why they are poor. This was very popular science of the day because it would mean that the average person had nothing to feel guilty about. It was just nature routing out the weak. Words like idiot, cretin, and moron have their lineage as referential to the poor. While it is not fashionable to use this kind of logic racially it survives when we speak of the poor. They deserve their station in life because they’re genetically predisposed to it. It is perfectly acceptable to use classist slurs like “white trash” while racial slurs are taboo.

Recently, the state of North Carolina is paying out checks for damages to the surviving recipients of the forced sterilization program that in some places ran until 1979. A 1927 Supreme Court decision that upheld the practice made the following statement: “It is better for all the world if, instead of waiting to execute degenerate offspring for crime or to let them starve for their imbecility, society can prevent those who are manifestly unfit from continuing their kind.” Oliver Wendell

It is estimated that 6.000 people were sterilized in this country through the course of a century. I have yet to see a single journalist use this as a rebuttal when we talk about the Chinese human right infringement limiting how many children can be in one family. Take heed and read Goulde’s book because the eugenics movement is so often portrayed in racial terms. Goulde’s analysis of eugenics paints the scientific as having a base in socioeconomic agenda. Goulde clearly defines that eugenics is rooted in the observance of the poor. This pseudoscience had a  myriad of lasting affects on legislation and immigration reform. Immigration quotas are a direct result of shoddy intelligence testing that was being done at Ellis Island. The non-anglo test subjects were asked questions in English regardless if they spoke it or not and they inevitably were classified as having sub par intelligence. Later, the same kind of shoddy intelligence testing was applied to African-American military personnel.

For many of us who served the issue of class was a divisor between enlisted and commissioned officers.The justification for this imposed class systems has many tones and tenors but at the end of the day is its segregated class. The ranks of commissioned officers are primarily male and white. The upper echelons of the brass are even more exclusive.

One night while standing a bridge watch the mini judge (the assistant judge) went on a tirade for at least 20 minutes about the winners and losers in the game of life. The next day I witnessed that officer being escorted off the ship. As it turns out his affair with an 18 year old airmen had ended in pregnancy.

These class barriers between enlisted and commissioned officers are static. As the mini-judge so aptly showed  the barrier could be breached but only from the side that wears khakis (commissioned). Officers weren’t bad people but part of identity of an officer requires that something be lower.

We have been indoctrinated into a class of entertainment that pokes fun at the disenfranchised. Shows like Jerry Springer and Cops targeted the poor specifically as lessor members of our society. And we were all entertained without questioning its ethos. One of the ways that we can prevent a violent class war is to question our preconceptions.

We insist on equality on racial bounds. If one looks at the demographic of a state school and a private school across race we have reached a semblance of equality but look at the same demographic across the socioeconomic divide and the disparity is staggering.

Having attended both a state college and an elite private university I can tell you that I worked much harder to achieve the cheaper education. While attending a private school I witnessed affluent and upper middle class youth skating through with minimal effort and golden parachutes. On the public school front it seemed sometimes that the professors had no regard for attrition and were out to fail anyone who fell behind. In private university the professor sometimes asked the student input into deadlines and bell curves.

Previous: The Unknown Soldier
Next: Motivation Monday I