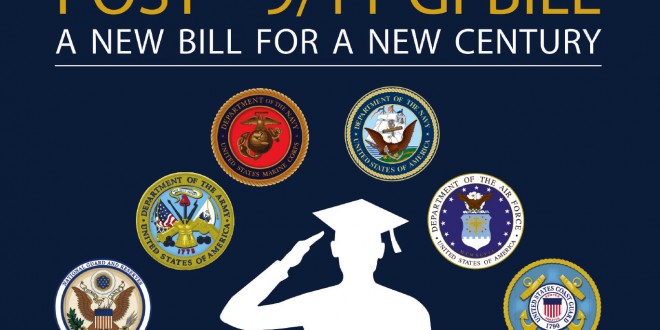 The post 9/11 GI bill is the result of election bingo and while there were honorable people involved like Robert Byrd the deceased senator from West Virginia; the whole of it (I suspect) was a ploy to embarrass the republicans before the 2008 elections. Be that as it may, it was a great legislation that had finally seen its time. The Montgomery GI bill did not keep up with soaring cost of education and cost of living.

The scatter for market share is led by technical schools that spend exorbitant amount of money on advertising that takes away market share from really good universities that these vets could possibly attend. Hypothetically, you could go to Harvard or Yale on this version of the bill. This was the intention the original GI bill to created with, the birth of a new intellectual class made up of returning WWII veterans.

There is nothing wrong with technical schools like Devry and ITT-Tech but the amount of money they are spending on advertising overshadows opportunities that these veterans might have. High quality top 100 institutions don’t traditionally advertise. I would never accuse the VA of not advertising benefits so they could spend less money on veterans. But many veterans I had known didn’t even know the GI bill changed let alone that the yellow ribbon scholarship existed. It turns out that the for profit institutions who have grabbed market share consist of just eight for profit educational conglomerates.

“Statistics compiled by the staff of the Senate Health, Education, Labor and Pension Committee, are alarming veteran advocacy groups, particularly in light of abuses by some for-profit colleges uncovered by congressional audits and by enterprising news organizations.

The for profit education system has stolen one of the greatest equalizing legislations ever and is robbing the American public of its new intellectual class. Veterans graduating from these for profit schools will fare even worse in this economy and the opportunities available to them are diminished even further. Veterans have the highest unemployment rates in this country.