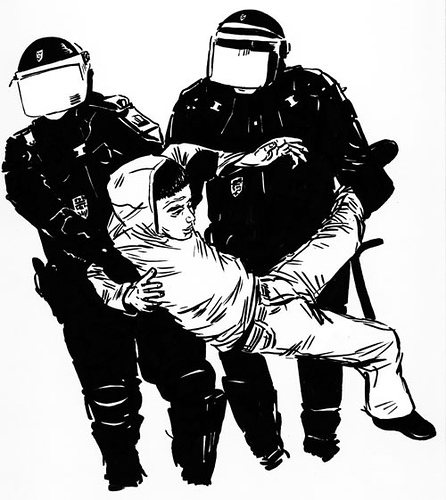 Posted by: patrickgokey November 16, 2011 in Occupy

The protesters at the Civic Center Plaza were not ordered off the grass before the raid happened.  Tables, signs, sleeping bags and other possessions were impounded in the raid and the police did not allow the occupiers to remove anything other than what was on their back.

Approximately ten people were arrested and several protesters were hit and pushed around.

The occupiers are holding an emergency general assembly right now by the Star of India on Harbor Drive.  People are encouraged to join them and discuss the next steps in this revolution.

A report by NBC Bay Area states that SFPD raided parts of Occupy San Francisco early this morning too.  Seven were arrested and eleven tents were taken down.