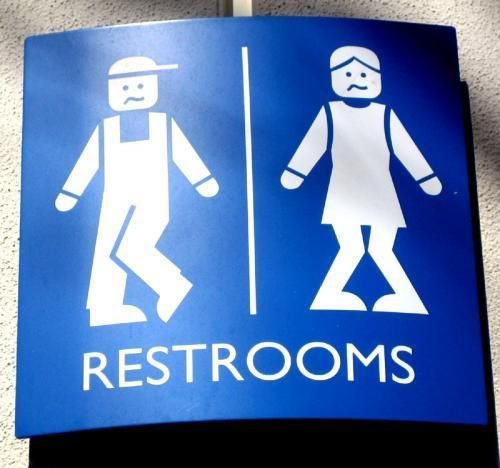 It’s no secret that life in the Navy is vastly different from the Army or Marines, and the same can be said for the Coast Guard and Air Force. But one thing that most of us that served can unanimously complain about its the lack of adequate toilet facilities. I mean come on, there are over 6,000 people on a ship and around 500 steel thrones (no they are not porcelain). Combine the fact that everyone eats on the practically the same schedule and you might spend half your day looking for a place to ‘go.’

Not to mention that after every major drill the danged things flooded and had to be cleaned and sanitized again. Often a handful of people had the job of keeping one clean 24 hours a day. For some it wasn’t that bad but for others (like the one I lived near) there were more than a dozen commodes and as many showers.

I was on the newest carrier of the day, the USS Ronald Reagan CVN76, but the newest of the new, the USS George H.W. Bush CVN-77, has taken things to a whole new level.

A sailors mother details on her blog http://need2go.blogspot.com/ the woes of Navy life when one needs to go. Apparently the ship doesn’t use the tried and true salt water method and has switched to a vacuum system that has been known to put every toilet on the ship out of commission.) Where’s a crazy emoticon to express wonderment, dismay, a raised eyebrow and an OMG when you need one?) I have no doubts there was some deep-sixing of human waste off a few undisclosed weather decks during these periods.

While our heads (bathrooms) were known to go on the fritz quite often they never went all at once. And while this isn’t about Occupying anything more than some toilet space those that have served should get a hearty chuckle and those that haven’t at least no some of the woes of military life.

So while you’re hunkered down making your daily deposit just think some military men and women not only have protected that freedom but at times are forced to go without even the simplest of human needs.

It seems that life at sea really hasn’t changed much since man first set sail. Even at $6 B, sometimes it is the simplest and cheapest things that keep servicemen comfortable and is at least one thing that needs to be addressed to keep the fighting forces of America fighting and not just waiting for the crapper.

Matthew Baker is a veteran of the United States Navy and was stationed aboard the USS Ronald Reagan from 2002 to 2006. He holds a Doctorate in Education from the University of Oklahoma. Baker has worked as a reporter and photographer for The Purcell Register in Purcell, Ok, and is currently teaching English and Journalism to high school students in Norman, OK.
Previous: Anonymous Calls for Digital Destruction of Bloomberg & NYPD
Next: Occupy San Diego, San Francisco Raided