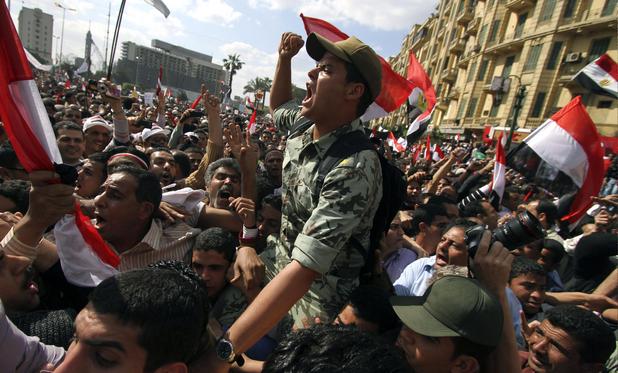 Posted by: karololesiak November 21, 2011 in International

Over the course of the last three days violence has erupted in the streets of Egypt and there have been reports of people set on fire and at least 15 deaths in the last 24 hours. The people believe, rightly so, that Egyptian military has co-opted all their hard work in a constitutional coup d’état.

“Earlier this month, the military council produced a draft document setting out principles for a new constitution. Under those guidelines, the military would be exempted from civilian oversight, as would its budget. This has angered protesters who fear the gains they have made during the uprising could yet slip away as the military tries to retain some grip on power.”

The violence being used against the protesters has reached beyond the bounds of cruel. Medics and first responders are being beaten by police. It has been reported that the military set fire to Tahrir Square. The Egyptian interim military government has reported only use of rubber bullets while protesters hold spent shell casing in their hands on the  Al Jazeera livestream. The scene in the square is grim. “Health officials say as many as 900 have been injured, including at least 40 security personnel.”

The parliamentary election on the November 28th offers little hope for the occupiers of Tahrir Square. The provisions themselves insure that the looming presence of Egypt‘s military industrial complex will never see an end. And regardless of any parliamentary changes the Egyptian people will never see democratic self-determination.

We at Soldiers of the Cause have a continuing open letter to Egyptian active duty and inactive military personnel. Join us. Join the Egyptian people. Passively resist.