Home » History » The Assassination of JFK 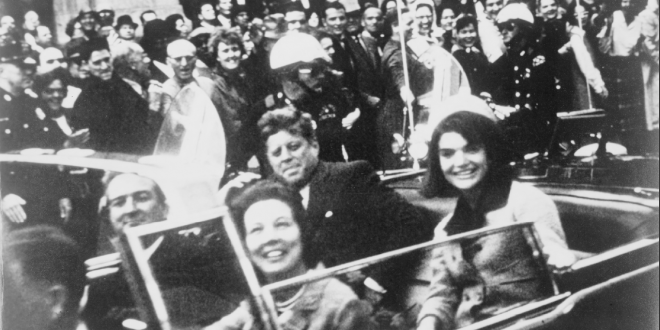 Posted by: karololesiak November 22, 2011 in History

On this day, 48 years ago, John Fitzgerald Kennedy was struck down by a sniper’s bullet in Dallas. Kennedy was a United States Navy Officer and there is a naval vessel named after him.
That sniper, for the historical record, was Lee Harvey Oswald.
The assassination was dubious, to say the least, and a whole conspiratorial culture emerged.

The predominant alleged conspiracy (that has never been proven) is the theory of multiple gunmen. There were also strong suspicions of a government cover-up, especially, since there are still documents yet to be released by the government containing information which would be crucial to ending the debate.

JFK was not very liked in certain parts of the country because of his declared status as a Catholic. Some even celebrated the assassination.
I am not a fan of the man’s politics because I would liken him to other moderates that wore liberals clothing. His death was a tragedy to the public mind. People lost hope in American politics.

Arlen Specter, the now senator from Pennsylvania, was a US District Attorney that argued against the conspiratorial view of the assassination in the Warren Commission. The idea of the magic bullet came from Specter and his skilled apologist rhetoric during the Warren Commission inquiry.

Kennedy also clashed with the Military Industrial Complex. The Admirals and Generals under JFK disobeyed him on many occasions. The Bay of Pigs incident, the standoff with Cuba, is a prime example.
There are 16 different conspiracy theories that try to explain the death of Kennedy.

One of the conspiracy theories mentioned in Jim Marrs’ book, Cross Fire: The Plot that Killed Kennedy, mentions a conglomerate of international bankers might have ordered the killing of Kennedy because JFK had plans to dismantle The Federal Reserve and give their power back to U.S. Treasury Department. The basis for the proposed the motive was Executive Order 11110 which was enacted by Kennedy and threatened the silver standard. It was not partially repealed until the Reagan administration.

I cannot concern myself about conspiracy theories until I understand the psychological, and maybe groupthink, need for these kinds of narrative analyses. Karl Jung believed that UFOs were the product of a mass hallucination due to post war sociological trauma. For those that reject Jung because of his seemingly crazy theories about collective consciousnesses, then I offer that the media industrial complex acts as this net of the collective mind. Conspiracy theories also seem to fill the void of things the human heart cannot understand.

I do not make any judgments about any so-called conspiracy theorists’ narrative inductions but I cannot ignore the human psyche. That being said, Kennedy made a lot of enemies. That is why there are so many possible motives. And one is a lone gunman just plain got lucky. The conspiracy theories of the day give insight into the worries of a people that felt they could no longer trust their government. The created narratives are arbitrary beside the fact the world is structured in a way where the truth always alludes us by governmental interference of a patriarchal mindset that believes they know what is best for us.

The people of Kennedy’s era were told that they needed to heal. Much like the people of the era where Al Gore lost his bid for a recount by the Supreme Court were told to heal.

Perhaps, some wounds need to stay open. Have salt poured into them. Without a stitch. Without a bandage. Brandished like a tattoo. So we can know from our group pain and maybe learn.