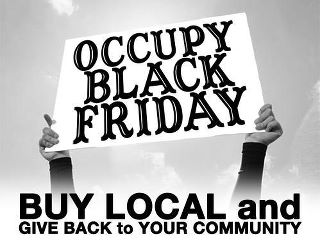 Maybe you don’t agree with OWS, maybe you really just don’t like the major Big Box stores, so here is a way you can stand in solidarity without sleeping in tents: go local.

The Associated Press reports that OWS activists are urging consumers to use their hard earned dollars to support local merchants.

What a radical idea… not really, most of us can remember a time when main streets were crammed full of mom-and-pop shops where you could buy almost anything you needed. Then the Big Box stores moved in and instead of walking down the street to get what we need we’re driving around town.

You might argue it’s cheaper to go to the Big Box stores, but is it really, when you have to pay $4+ a gallon of gas to drive to a bigger city or to drive to the outskirts of your town?

This urging by OWS is at the heart of their movement. Quit supporting a corporation and vote against them by supporting your neighbor with your money.

Not only will you be supporting your neighbor, you will be supporting yourself, because that money stays in your town and isn’t shipped overseas or to another state. Imagine, feeding and watering your community instead of increasing the stranglehold corporations have on our small towns and cities.. What a radical idea.

Matthew Baker is a veteran of the United States Navy and was stationed aboard the USS Ronald Reagan from 2002 to 2006. He holds a Doctorate in Education from the University of Oklahoma. Baker has worked as a reporter and photographer for The Purcell Register in Purcell, Ok, and is currently teaching English and Journalism to high school students in Norman, OK.
Previous: The Assassination of JFK
Next: Good News, Bad News