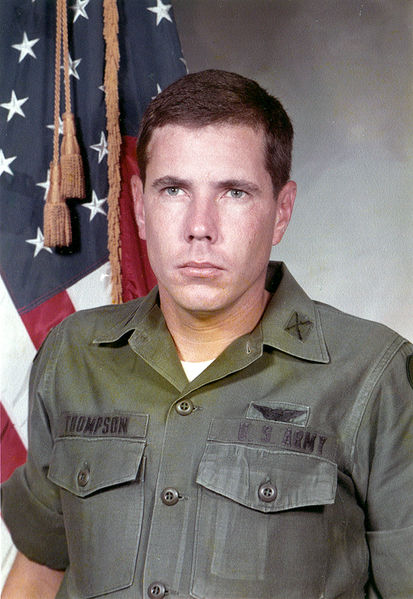 The story I am about to share with you took place in Vietnam over 43 years ago. I would venture to say that most Americans have never heard of Hugh Thompson but on March 16th 1968 he put his life and his reputation on the line in order to save some innocent civilians from the ravages of war. The whole event has been shoved into the dustbin of history. It’s like it never happened. Our government and military have a memory that is “hard wired” to remove any nasty events like the massacre at My Lai.

May I humbly beseech our country, our government and every American citizen to never forget but rather “learn” from the events that unfolded 43 years ago at the tiny village of My Lai.

So here is the story:

It was March 16th 1968, and things seemed peaceful. The weather couldn’t be any more beautiful.  Hugh Thompson, a 24 year old Army helicopter pilot, serving in Vietnam, was thankful for the clear weather.

He and his two man crew left their compound and headed for what they were told was a suspected North Vietnamese stronghold. As they arrived at the small village of My Lai, Thompson maneuvered his helicopter between two tree lines. His crew member, Larry Colburn said:

[quote] “You could smell the jungle and see the fog rising up. It was, by all accounts, a beautiful day” We were flying low and could clearly see the villagers. As hard as we looked, we encountered not one Vietcong.  The village was occupied by women, children and old men. It was Saturday morning and they were carrying empty containers and baskets. It was obvious that they were heading to the village market. It was an activity that was probably carried out, in the same fashion, by their ancestors for generations.”[/quote]

Thompson decided to move out of the area and check another nearby village. Once again no enemy was encountered. They swung their helicopter around and headed back to the village of My Lai.

They dropped below the tree line and were skimming across the jungle floor. They could clearly see the villagers but this time nobody was moving. They were all dead. Women, children, infants and old men and women were piled up like cord-wood in a long irrigation ditch. To the horror of Thompson and his two man crew, they were witnessing an American army platoon, lead by Lt. Calley, in the process of systematically murdering 400 to 500 innocent Vietnamese villagers.

Hugh Thompson landed his helicopter. He placed his two men between the soldiers and the ditch. He instructed his two crew members to open fire on their American comrades if they attempted to kill one more villager. Hugh Thompson went about convincing ten terrified villagers to come out of a small earthen bunker that they were hiding in. He also discovered an 8 year old boy in the ditch. He was alive and was clinging to his dead mother. Thompson called for additional helicopter support and they transported these few remaining villagers to a hospital and saved their lives. Hugh Thompson personally brought the young 8 year old boy to the Quang Nhai Hospital which was run by catholic nuns.  The mother superior met Thompson and only at that time did he release the young boy to the care of the nun.

Paula Bock, a journalist for the Pacific Northwest Magazine, who was reporting on this tragedy said:

[quote]“When you are young, thousands of miles away from your home town, terrified and surrounded by all sort of craziness it is very easy to lose your moral compass.”[/quote]

The unspeakable actions of these American soldiers are not to be condoned however they are, in my opinion, symptoms of a deeper problem that exists in our country.

Could the real problem be that our government has developed a bias for violence and war? This bias for violence has been systemically institutionalized into the thinking of many American citizens. Our government’s “Might Makes Right” mantra is constantly communicated in the newspapers, TV and in the war games that we allow our children to play. Yes, our government is creating more Lt. Calleys and more My Lai massacres.

So why are we surprised when young soldiers do things similar to what was experienced in the tiny town of My Lai?  It’s because they have been exposed to violence throughout their entire life.  Our country inexplicably draws itself to violence and war, much like a moth draws itself to a lit candle.

“I hate war” said Dwight D. Eisenhower, “as only a soldier who has lived it can, as only one who has seen its brutality, its futility, its stupidity”

If ever the citizens of the United States should be vigilant and question their government now is the time.  Seeking the truth and speaking out when you believe your country is not taking the moral high ground is not an option it is a responsibility. Dissent, rather than being unpatriotic, is the highest form of patriotism.”

At this very moment the entire world is embarking on a period of major transition. The recent earthquake in Japan and the ensuing Tsunami should jolt us into the reality that all people and all nations exist, at best, on a very fragile planet and that we need to view all people and all nations as family and work together rather than against each other. Let the United States take the recent events as a wake up call and as a nation, abolish war as an instrument of national policy.

Let us, as a nation, take the moral high ground.  Let us turn to hope and not despair. Let us transition from war into peace.

Let us, as a nation, rediscover our moral compass and once again let the rest of the world view our nation not as a problem but as a solution. Let us win the admiration from the world not because of our firepower but rather our “spiritual power.”

Jack is an Army combat veteran from the Korean War. He served in Korea in 1953 with the 7th Regiment, 3rd. Infantry Division. He retired from the Hewlett Packard Company in 1991. After retirement, Jack owned and operated a management consultant business. He’s presently Vice President of the Veterans for Peace (VFP) San Diego Chapter. The VFP pledges to use non violent means to achieve peace.
Previous: Good News, Bad News
Next: Troubling Apple iPhone Technology and its Possible Effect on OWS