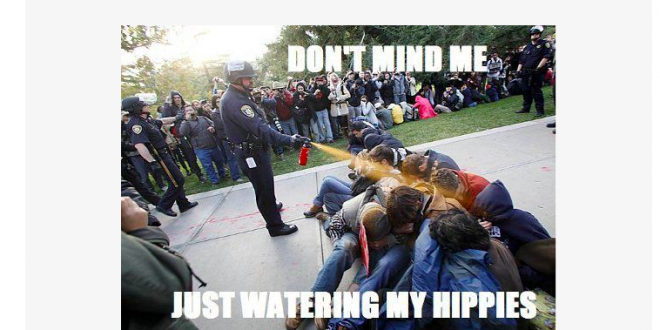 Posted by: karololesiak November 28, 2011 in Uncategorized

In April 2010 when Wikileaks released videos entitled Collateral Murders depicting violence against children and Reuters reporters, the world was in shock. The pentagon has spun this as an isolated incident and launched two investigations that cleared those involved all of wrong doing.”The dead included two employees of the Reuters news agency: photographer Namir Noor-Eldeen and driver Saeed Chmagh. The US military confirmed the authenticity of the video.”

The Geneva Convention’s Rules of Engagement (ROE) have fallen by the wayside in the urban warfare context. As I watch police brutality all over the country I am led to the conclusion that if we allow this behavior overseas then we or our children will be forced to relive it stateside. Michael Moore’s 2010 article, “Iraq War Vet: We were told to just to shoot people, and the officers would take care of us,” revealed many accounts from soldiers that painted the evaporation of Geneva Convention guidelines as the dominant ROE. This article appeared 3 days after the Wikileaks release and gives a number of examples of first hand accounts of unaccountable violence against citizens and reporters.

“I watched soldiers firing into the radiators and windows of oncoming vehicles. Those who didn’t turn around were unfortunately neutralized one way or another – well over 20 times I personally witnessed this. There was a lot of collateral damage… ‘We took fire while trying to blow up a bridge. Many of the attackers were part of the general population. This led to our squad shooting at everything and anything in order to push through the town. I remember myself emptying magazines into the town, never identifying a target…we were given a direct order that if any children or civilians got in front of the vehicles in our convoy, we were not to stop, we were not to slow down, we were to keep driving. In the event an insurgent attacked us from behind human shields, we were supposed to count. If there were thirty or less civilians we were allowed to fire into the area. If there were over thirty, we were supposed to take fire and send it up the chain of command.”

As police officers get tired across the country I wonder how many activists will fall victim to bad command decisions. How will the domestic ROE change when they are in the dead of winter and irritated by the cold? One Philadelphia police officer has resolved to trolling occupiers and taunting Occupy Philly with Philadelphia Mayor’s 5PM eviction curfew for Occupy Philly.

Someone going by the name of Mike Sidebotham—whose profile indicates he is a Philadelphia police officer—posted a menacing message to the Occupy Philadelphia Facebook page Saturday evening. He posted the notorious photo of Lt. John Pike, the University of California-Davis police officer filmed casually and cavalierly hosing protesters with pepper spray. The photo was captioned, Don’t mind me / Just watering my hippies. The post included a personal message: “5 o clock is coming.” 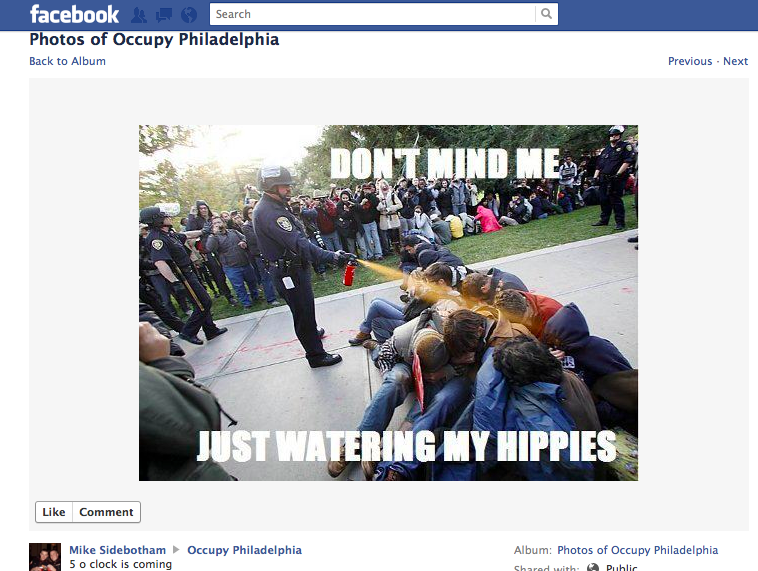 It is these brands of cruelty we contend with my brother and sister warriors. A person I served in the military with, who shall remain nameless, used to beat up homeless people for kicks. One day he showed me a book written by a white supremacist author who told a dark detailed prophecy of a race war.  This same person is about to graduate from a police academy in the South.

There is a pattern of cruelty that funnels itself through authoritarian specializations. Studies show that police officers are oftentimes more prone to committing domestic abuse than other career paths. There is  a similarity in the psychological profile of those that enforce the law and those that break it. For anyone who has encountered the seemingly cruel, it is the chicken or the egg argument. Are cruel individuals created by these institutions or are they drawn to them? I scoff at attempts to explain this away as an aspect of human nature. Human nature, for the most part, will do what’s accepted in the society that it finds itself in.

Where there is a need for cruelty, cruel individuals will emerge. In the existential psychologist Victor E. Frankl’s book: Man’s Search for Meaning he makes no judgments on the concentration camp prison guards that he encountered as a Jew sent to the camps during WWII. To Frankl some of the guards were cruel and some weren’t.  But for those that weren’t cruel, their crime was watching. Observing violence apathetically has an almost crueler tinge. You see, the cruel usually don’t know they are cruel. Monsters don’t know they are monsters. But if one knows better there is no greater crime than just watching.