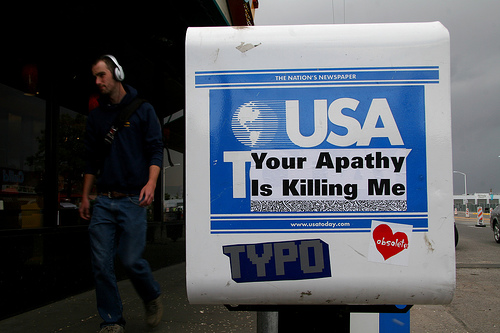 I woke up to disappointment today after reading the Senate had passed the National Defense Authorization Act while simultaneously rejecting the Udall, Webb Amendment.

For those who are unaware, which seems to be the majority of the United States, the National Defense Authorization Act (NDAA) bill was drafted in secret by Senator John McCain (R-AZ) and Senator Carl Levin (D-MI). The bill redefines America as a “battlefield” and authorizes US troops to conduct military arrests of US civilians on US soil, and to indefinitely detain citizens without charge or trial. The Udall, Webb Amendment cosponsored by Senator Mark Udall (D-CO) and Senator Jim Webb (D-VA) would have stripped sections from the bill that authorize the military to indefinitely detain individuals without charge, to force police officials to transfer a large number of terrorism suspects into military custody, and to further institute restrictions on the transfer of cleared Guantanamo detainees. Click here to see how your Senators voted.

Does that scare you? I hope so, because it should. I am more fearful now than I was after George W. Bush signed the Patriot Act into law in 2001. How many of your friends know about the NDAA bill? I post updates to various social networking sites on a regular basis in an attempt to inform my friends and family about important issues that they should care about. I have noticed not many care, though there are a few who do, and I am more thankful for them than they could ever realize.

I am having a hard time understanding how the American populous can be so apathetic when it comes to the important issues. The media, of course, plays a large role in the non-exposure of truth to the general public. We have been dumbed-down so much that we no longer care about the real, true current events. Instead we care about the latest American Idol winner or Lindsay Lohan’s continued drug addiction or Pippa Middleton’s newest beau. Why is it that many of my friends can name every member of the Kardashian family, but they cannot tell me who Herman Cain or Michelle Bachmann are? I have friends who vote in every X Factor poll but have yet to cast their vote when it really counts. That troubles me to no end.

What other factors play a part in this ignorance? I have friends who complain about being unemployed. I tell them what the Occupy Wall Street Movement is. I tell them that they should be a part of the movement because unemployment is one of the major issues being discussed. “No, it’s just not my thing,” an unemployed and longtime friend told me. Well, wake up friend, because this is exactly your thing.

“The price of apathy towards public affairs is to be ruled by evil men.” -Plato

It is time for everyone in America to wake up. In fact they should have woken up a long time ago, as all signs have been and are pointing to major national and global revolutions.

American apathy is one major issue that has kept me awake many nights these past few years. I am quite sure that I will lose even more friends over this article than I have already for my incessant Facebook postings pertaining to economic, political, and social issues that affect us all.

I am okay with that because I know I am doing the right thing, and when all hell breaks loose on American soil, maybe I will no longer be seen as the guy always wearing the proverbial tinfoil hat.

Previous: Signs of Martial Law
Next: War is a Racket