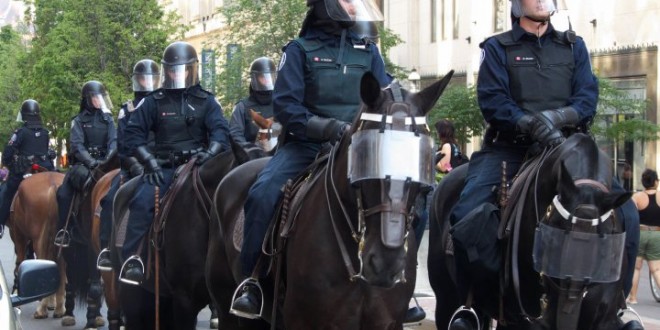 Posted by: karololesiak December 1, 2011 in Occupy

During the 2008 campaign trail I went to see Obama speak at Franklyn and Marshal College. The Lancaster, PA Police Department controlled the crowd with horses and I remember thinking to myself that this was an incredibly bad idea whose time had evaporated.

First of all, in a normative situation, its intimidating and the horses are defecating. Secondly, it is incredibly dangerous to have an animal deal with large crowds of politically energized people, but more than that, it is cruel to the poor animal. If police need to be so much higher above a crowd, why don’t they just get stilts? The whole thing appeared very medieval.

After the long night of siege at Occupy Philadelphia the police decided to bring out the riot horses. Up to that point the Philadelphia police had been a model for how law enforcement should behave, but one outdated practice will probably cost them millions in damages.

It is not the overtime that the taxpayers have to beware of in these situations, it is the lawsuits. NYPD paid out $3 million in the Tompkins Square riots on the lower east side. I caught up with Occupy Philadelphia and did a phone interview with Occupy Philadelphia’s public relations representative in the wee hours of the morning.

Occupy Philly Interview 11302011 by Karol S. Olesiak
The music is from No, really. The album is entitled ‘Thousand Yard Stare.’ Please support.

Previous: The Spat Upon Vet Revisited
Next: Hooverville Re-Occupied