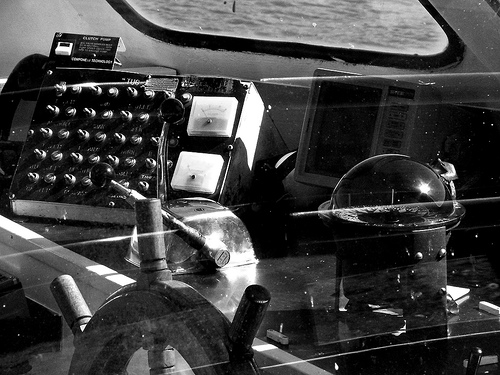 My primary area of expertise in the Navy was digital cartography. My rate, Quartermaster, an ancient maritime job that involved sextants and azimuths, nautical charts and star charts, a Bowditch (the bible of all that is nautical and maritime), and rolls of paper from every corner of the world, beautifully crafted to precision, stacked from wall to wall, demanding space. This is how Joseph Conrad would have felt before he made his journeys and wrote about them.  Imperialism crept its ugly head into the romantic musings of a boy, and I, like Conrad, saw that the world did not look like those charts. It had owners.

All of my ancient instruments and I, endowed with ancient knowledge, were  sent to a corporate school run by Sperry Marine to learn how the knowledge of the ancients had propelled humanity into the digital age. Digital Chart Overlays and Voyage Management Systems are not classified anymore and available on the open market in varied forms. When I worked as the assistant to the executive director of Legal Aid Society of San Diego I tried to implement software called ARC GIS. It used geocoding and GPS data to track populations of migrant disenfranchised individuals who needed translators and pro bono legal representation. I never imagined how maliciously this kind of software could be used but I should have known.

When I returned to the East Coast my first encounter with a hybrid of this tech was someone that I knew who worked for a large grocery delivery chain in New York. They were using data compiled on household median income and chart overlays to calculate where their delivery area should be. My second encounter clicked only in delayed reaction when I realized that banks during the housing crash were using similar data compilations to foreclose on homes based on median household income in a given area.  This is only the navigation end of the military industrial complex seeping out into commercial use; imagine where really malicious technology ends up.  Imagine now how the Intelligence Industrial Complex has been distributed amongst corporations that have higher GDPs than most countries. The largest corporation is the 27th largest country.  This seepage of information could be viewed as accidental.

Paul Virilio, a theorist in calamities, believes that integral accidents are inevitable with any technology and the rate at which these accidents are probable is related to the speed of the science of the respective culture. Every time a ship is invented, so is a shipwreck. The onset of the locomotive leads to the derailment and so on. This correlation between creation and destruction is implied and does not have to exist in any actuality outside of individual and group consciousness to effect material reality. Virilio believes that apocalypse is an inevitability. I say that the moment when someone points it out the inevitability becomes less probable. Creation and destruction cycles inherent in the psyche do not excuse war. And the price of war is always an inflated military regime.

One thing that the ancients understood that we don’t, besides creation and destruction cycles, was that technology was sacred. Technology, for them, could only come from a place that was divine. Each creative thought is a gift from somewhere less profane than here. It was meant to be respected. Perhaps Mr. Virilio is right about velocity of science determining the rate of integral accidents. However, he misses quality (direction) of the respective science. If scientific advancement is spurned by profane utilization: war, the accumulation of wealth, and the consolidation of power, there will always be a “quality” of accident. But if scientific advancement is led by a desire for humanistic values people as a whole hold a sacred the “quality” of that accident would be different. I would challenge what an accident means to Mr. Virilio. An accident could always be a happy one.

This should be on a recruitment poster somewhere. “Only you can make the inevitable accident happy.” The balance of the human race will require something new. Something that has not existed before. Creation and destruction cycles are only the ebb and flow of our minds trying wrap themselves around the wonderment of being alive, aware. The only way to prevent Virilio’s apocalypse is to be better. It always starts with you. Guilt will not get us there and neither will shame. Neither will violence for that matter.  We all have to reach into that sacred place and respect what is brought back.