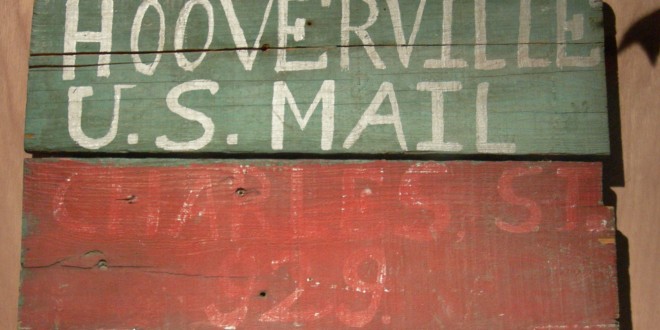 Posted by: karololesiak December 5, 2011 in Occupy

During the Great Depression, shanty towns popped up first in New York then all over the country almost spontaneously:

“…the episode of the encampment at the foot of the Manhattan Bridge, demolished by the city on Aug. 17, recalls the ‘Hooverville’ of shacks housing more than a score of homeless people in the emptied Central Park Reservoir in 1931-1933.”

Almost the entirety of Central Park become a shantytown and for 10 years police, all over the country, tried evict these kinds of settlements. History does not have to be cyclical if we learn from it.

What happens to us now will depend on our collective memories and how far they stretch. Hooverville’s memes almost never make an appearance in today’s media. It is a part of our history they would rather not remember, but there are important parallels in this historical comparison that need to be taken into account.

In Washington D.C. today city inspectors condemned a structure that I can only compare to the skeleton of a starter home. As I write this a joint task force in conglomeration with the D.C. metro police are trying to remove occupiers from a structure that appears superior to any pictures I’ve seen of the Hooverville Occupation.

Police gave demonstrators a one-hour deadline to start dismantling the two-story plywood structure Sunday morning and then began moving in when that deadline passed. Police on horseback cordoned off the area, and officers removed protesters one-by-one before putting them in handcuffs and taking them into custody.

Hooverville played an important part in changing the callousness of the public mind and making parachute reforms for the common man.  An economist I respect, a graduate of the London School of Economics, tells me that we are living in another depression. We just cannot feel it because of the parachutes already in place from the Great Depression era. 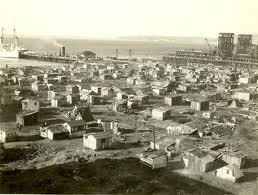 So what does this parallel bring to light about our present situation? Occupiers all over the country are being evicted and everyone seems to be missing the point. There is no space left to occupy because corporations have, through bad faith, swindled the masses out of the American Dream. The 99% are the proverbial native Americans in this metaphor. They were given entertaining trinkets in exchange for their birthright of space.

What does it say about our culture that these are not shantytowns but tent villages? What does it say about the occupants’ skill sets? During the Hooverville Occupations the disenfranchised artisans built solid encampments, while those without skills used cheap materials. Now we have tents. Not only is the knowledge of building shelter not readily available but the space where Hooverville-like encampments would have popped up are being kept as vacant parking lots over public interest.

“Like human pack rats, ordinary people were forced to carry, wheel and drag bits of lumber, tin, cardboard, tar paper, glass, composition roofing, canvas, and other materials to the sites of America’s new real estate boom. Some fortunate men were skilled in carpentry, and were capable of constructing fairly solid structures, while others less skilled scraped together packing boxes and other discarded items to provide shelter. Unemployed masons salvaged stone blocks and old bricks to create 20-foot tall shanties. However, more unfortunate men were reduced to sheltering themselves inside empty water mains.”

Comparably the Occupations that have popped up in response to The Great Crash have been cleaner and more organized than Hooverville ever could have been.  Perhaps this is their failure, because the most powerful images that have come out of various occupations have been the violent indiscretions of the police. It is difficult to find power in memes of organization and civility.

The major arguments that are used against the various occupations are historical ones. Historically things are not as bad as they once were.  The world is less violent than it was a hundred years ago. But perhaps that is because the violence has to be more discreet.  Perhaps we have been conditioned to expect very little like the occupants of the Hooverville.

Many Occupations invited the homeless to live amongst them and shared their food. That is more than the powers-that-be are willing to do.  Many of these homeless are simply down on their luck veterans. There have been many urban strategies to expunge the poor out of city limits rather than dealing with the problem of poverty.  All of the New York mayors in the last three decades have engaged in this forced exodus of the poor through real estate deals and city ordinances.

Michael Muskal from the Los Angles Times has already made this point but my simple contribution is a question. What does the eviction of a transformative metaphor say about us? Hooverville changed the dialogue of American politics and made FDR president. The new deal was enacted by FDR but only in answer to the call of the desires of the public mind. Not everyone lived in squalor during the Great Depression but those who didn’t live in the shantytowns had to see them on a regular basis. They became ingrained in the public mind and that mind became thirsty for change.