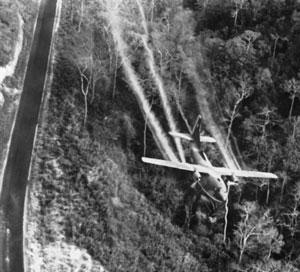 The Legacy of Chemical War

I was born in 1943, mid WWII, to depression era parents who grew up in the

back breaking cotton fields of SE Texas. Every Sunday was church time,
twice each Sunday actually, in a Southern Baptist church. I was reared to
believe in God, country and family. I was taught Manifest Destiny, that the
USA was the moral compass of the world and that my government would never
lie to its citizens. We were the good guys, we always wore the “white hat
and the Christian God, guided my country.

I went to Vietnam in May of 1968, and as I wrote in my book Meeting The
Enemy: A Marine Goes Home, as a believer. I didn’t necessarily believe in
the war in SE Asia, but I did believe in my country. Stenciled over the
door of the Marine barracks were the words “My Country: Right or Wrong, My
Country.” This I believed.

After a year as a combat Marine on the DMZ I returned to the US a
disillusioned and confused young man. The belief in the righteousness of
the US totally was destroyed. After 30 years of alcohol, drugs and self-examination

I returned to Vietnam in 1998 to see a country of which I still
new little and to “meet the enemy.” I then was introduced to the Vietnam Friendship Village (VFV),

a residential hospital for children and VN veterans affected by the chemical
Agent Orange. For two years I raised money in Alaska, my new home, then
returned to the VFV to deliver the donations. In 2000 I moved to Hanoi
where I lived and worked with the VFV for nine years. I now live in Da
Nanag.

We Americans pulled out of Vietnam in 1973 after fighting a war that
covertly started as early as 1954 when the French were defeated at Dein
Bien Phu, then officially came to an end in 1975 when Saigon fell to the
northern troops. For us Americans, the war was over. We packed our weapons,
resolved our self of all responsibility – the dirty commies caused the war
– sent our troops home then went back to work while leaving a ravaged
country to rebuild itself.

During WWII Germany, Japan and Italy were our mortal enemies bent on the
total destruction of and then control of Europe, Asia and the US. After the
war ended the US aided in the financial recovery and reconstruction of
those nations, even allowing France to reoccupy Vietnam, a decision that
eventually led to the devastation of Vietnam through the French and the
American Wars. Today Japan, Germany and Italy are strong nations with a
healthy citizenry, while Vietnam struggles to survive. 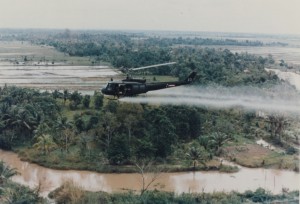 For the Vietnamese, as well as the Cambodians and Laotians, the war continues to this day. Children, now into the third generation, are born with severe handicaps as the result of dioxin found in the defoliant AO that was sprayed across southern Vietnam and along the borders of Cambodia and Laos, while farmers and their families are killed or maimed by the thousands of UXOs that are still buried throughout these countries.

Vietnam, a country smaller than the state of California that had no desire for war with the giant US, was attack without provocation then was left with its rice fields, cities, towns and villages destroyed and its infrastructure in shambles through the most intense bombing – 16 million tones of high explosives – in world history and the spraying of the poison defoliant Agent Orange, was unable to feed its starving and war exhausted population.

Many in the south say the post war years were in many ways as difficult as
the time of war because of starvation brought on by sanctions imposed by
the US, while others were dying and being maimed removing the tens of
thousands of lands mines, bombs and other ordinances that were left behind.
This dangerous and deadly work had to be accomplished before the rice
paddies could be rebuilt and they could again feed themselves.

A group of women told me of standing in line for many hours for bread or
250 grams – one Big Mac – of meat each week. Other women would stand in
line for the pregnant women who often passed out from the heat and lack of
proper nourishment.

Despite the signing of a peace treaty that called for the US to pay $4.5
billion in reparation, the US then placed Vietnam under a very severe
embargo, not even allowing the importation of powered milk to help feed
starving and malnourished children.  This embargo was in place against a
country that never had been and was no threat to the US. The US used the
trumped up charges that the Vietnamese were holding prisoners of war
therefore never paying one cent of the $4.5 billion. Eventually the
Vietnamese government had to sign an agreement stating the $4.5 billion
would not have to be paid in order to sign a trade deal with the US then
drop the sanctions in 1991.

Estimations are as high as two million deaths from starvation, disease,
UXOs and sheer exhaustion from simply trying to survive after the war had
“ended.” Deaths from Agent Orange and UXOs continue today. Since the end of
the war approximately 42,000 have died and another 62,000 injured from
UXOs. The Vietnamese estimate that 400,000 to 500,000 have died from the
effects of dioxin found in AO and that half a million children have been
born with birth defects. These numbers continue to rise.  These numbers
apply only to Vietnam. Cambodia and Laos were sprayed and bombed.

Reports show that more than 80,000,000 cluster bombs were dropped and about 10% remain unexploded contaminating millions of hectors of farmland thus depriving the poorest farmer’s access to the tillable soil that would raise their income. Most farmers make about $2 a day. This deep poverty drives them and their families into collecting scrap metal, i.e unexploded munitions, to have enough money to buy rice.  The clearing process is painfully slow and few have the necessary training need to clear large areas of wooded land.  Estimates are as high as 100 years for Lao to be cleared of all munitions.

A Loui, an area along the Lao border and about 120 kilometers south of the
infamous fire base Khe Sanh,, was a remote area of Vietnam without roads,
electricity or even the Vietnamese language, during the war. This primitive
slash and burn hill tribe were sprayed many times with AO and were bombed
repeatedly because they lived in the middle of the Ho Chi Minh trail, the
life line for goods and weapons for the Viet Cong and the North Vietnamese
Army (NVA). Today the Ho Chi Minh goes through the town of A Loui,
Vietnamese is taught in the small, local schools and the economy is rising
because of agriculture and mining in the area. Yet, hundreds of children in
this remote and seldom visited area are born with many severe handicaps
related to their exposure to Dixon or because their parents or grandparents
were exposed.

While the Vietnamese were working to rebuild their war-ravished country the
Khmer Rouge regime was assaulting its own people in Cambodia while
attacking Vietnam across their common border. All of this as the result of
the war US waged against Vietnam. This US funded murderous regime killed
more than 1.5 million of its own people as well as Vietnamese. The US
funded the Khmer Rouge with $85 million as well as food, medical aid and
weapons as a mechanism of revenge on Vietnam. The genocide in Cambodia and
the incursions into Vietnam continued until Vietnam invaded Cambodia in
1978 with 150,000 to stop the killing and to protect its border. The war
against Pol Pot lasted two weeks.