Home » Constitutional » An Open Letter to the Winter Patriot 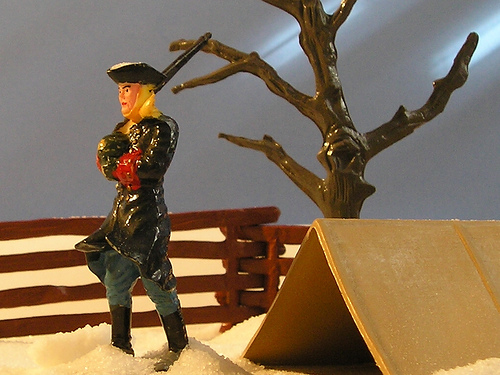 Mitch Green’s open letter appeared New Economic Perspectives on November 21st of last year. We believe it to be as true now as it was then. There are elements of Occupy that seem to be slowing down but the sluggish winter weather is only a test of fortitude. On the other end it produces hardened warrior activists that will prosper through a second and a third winter if need be. The winter is not over yet, but it will be, and all we have to ask ourselves is who we want to be on the other side of the verdant expanse.

The following letter reflects my view on the subject of civil disobedience and does not necessarily mirror the general opinion of New Economic Perspectives.  I offer my opinion as an Army veteran, student of the economy, and critic of an ongoing effort to wage economic war on the vast majority the population.  If these words move you, I urge you to consider honestly the consequences if you decide to act.

As the occupy movement continues to grow in defiance of the heavy-handed police action determined to squelch it, a natural question emerges: What point will the military be summoned to contain the cascade of popular dissent?  And if our nation’s finest are brought into this struggle to stand between the vested authority of the state and the ranks of those who petition them for a redress of grievance, what may we expect the outcome to be?
If history is our guide then we know that story all too well.  Behind a thin veil of red, white and blue stands a nation that has used its military might to respond forcefully to any public contempt for the very institutions which bind us in exclusion from the liberty those colors evoke.  Just as a training collar keeps a dog in check, a highly militarized police force responds mercilessly, sharply, and without hesitation with an array of chemical warfare and thuggish brutality.  And where they fail, divisions of soldiers stand ready to deliver a serious and painful lesson to all who demonstrate their unwillingness to wait for democracy.
This has been the history of democracy in America.  The ink on the pages that chronicle the use of state violence towards an unruly citizenry is dry.  We cannot rewrite them.  We read them in lament.  But for each new day history waits; at the dawn of each morning we are presented with the gift of creation.  The prevailing thought woven into the fabric of our society today, threaded through both patterns of conservative and liberal ideology, remains the recognition that something is very wrong with the world.  Naturally, we form the question:  Can we do things differently?  Once we animate that thought and present it to society as a question demanding an answer, we begin to sketch out our draft of the world in the pages of history.
I call upon my brothers and sisters in the armed forces to ink their pens and help us write these next few, and most important pages in the history of our social life.  Soon, it is quite likely that you will be mobilized to aid the police in their effort to contain or disperse what their bosses see as an imminent threat to the sanctity of their authority.  As that day draws near, I remind you of these familiar words:
I, (NAME), do solemnly swear (or affirm) that I will support and defend the Constitution of the United States against all enemies, foreign and domestic; that I will bear true faith and allegiance to the same; and that I will obey the orders of the President of the United States and the orders of the officers appointed over me, according to regulations and the Uniform Code of Military Justice. So help me God.
Those that take this oath seriously are faced with a terrible conflict.  You must battle internally between the affirmation that you will place your body between the social contract embedded in the Constitution and those that seek its destruction, while maintaining your loyalty to the government you serve and the orders issued by its officers.  Sadly, society has placed a twin tax upon you by asking that you sacrifice both your body and your morality.  This tax has been levied solely upon you overseas, and soon they’ll come to collect domestically.  Your government in its expression of corporate interests relies upon your tenacity to endure, and your relentless willingness to sacrifice.  And so you do.
Now, more than ever we need your sacrifice.  But, I’m asking you to soldier in a different way.  If called upon to deny the people of their first amendment right to peaceably assemble and petition their government for a redress of grievance, disregard the order.  Abstain from service.  Or if you are so bold, join us. Make no mistake: The consequences for such decisions are severe.  You will be prosecuted under the full extent of the law.  But sacrifice is your watch word.
Thomas Paine wrote in 1776:
These are the times that try men’s souls. The summer soldier and the sunshine patriot will, in this crisis, shrink from the service of their country; but he that stands by it now, deserves the love and thanks of man and woman. Tyranny, like hell, is not easily conquered; yet we have this consolation with us, that the harder the conflict, the more glorious the triumph.
Today we are faced with a new revolution.  This time we are fighting to preserve our democracy, rather than to establish a new one.  And just as a grateful nation relied upon the Winter Soldier to deliver us from the colonial yoke of oppression, we ask that you aid us in our struggle to be free from the bonds of debt peonage and false representation.  In return we will stand in your defense as the elite, who have gained so much from your service, attempt to strip you of your hard won honor.
2012-01-09
karololesiak
Share !

Previous: How to Film a Revolution
Next: Motivation Monday VII