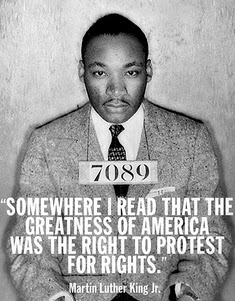 Posted by: karololesiak January 17, 2012 in History

In honor of yesterday’s Martin Luther King Day we present MLK’s appearance on NBC’s Meet the Press in 1965. School is in session as one lone preacher takes a mob of educated journalists and holds a clinic. Every one of the questions, including the questions of communist affiliation, is deflected with something other than point A to point B logic.

This logic only emerges in a minuscule amount of the population whose shoulders we stand on. Culture does not need these individuals because culture is a byproduct. But for civilization to exist individuals that can see past the simple A-B logic are paramount. MLK was one of these people. Most still get chills from listening to his speeches because he touches something good in the human spirit.

Biologically speaking, there is only one race that we belong to and that is the human race. The kinds of diversity that have been historically viewed as race are an evolutionary adaptation and not some grandiose mutation that makes us all different. Imagine for a second you are viewing thousands of penguins from a helicopter. The sea of penguins appears to be inhabited by the same kind of penguin, all appear to be identical. Now imagine that you are a penguin looking around at all the other penguins. Some penguins are taller than other penguins. Some of the penguins have different sized beaks. And some of the penguins are different shades reaching to the furthest extremes.

The concept of race is an invention of the so-called European Enlightenment. The Roman Empire before them did not have such classifications. In Rome you either were a citizen or you were not.  An archaeological dig several years ago in Great Britain revealed something interesting. Before England was England there were affluent persons of color residing in Great Britain. This is strange because it was the English that solidified and institutionalized the slave trade.

That all being said, just because race does not exist does not mean that race does not matter.  In some parts of this country it is still not safe for persons of color to visit. There is also much self-imposed segregation that goes on due to cultural habit and comfort. As creatures of comfort sometimes our opinions are apathetically not updated even when the times have proven them to be obsolete.

Martin Luther King, like the current president, was a smoker. When he was assassinated on the balcony outside his hotel room that is exactly what he was doing.  The first thing that was done before the press arrived was remove the cigarettes from his person.  MLK understood that his image was important to the younger generations that would emulate him. This is what sometimes is referred to as a sense of self. To be like the man that is what we must nurture inside of ourselves. That self does not have a race or a class. It just is. It believes in fairness (as Plato points out) and it exists outside of prejudices and misconceptions. It exists in all who do not deny it.