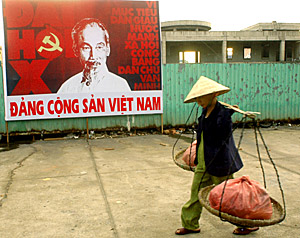 Posted by: karololesiak January 22, 2012 in History

The following video comes from the National archive. “Vietnam Special” is a great example of how modern governments use propaganda. Low level propaganda is a waste of time for an industrialized country that needs its intellectual class to be something other then zombies.

Tracking GDP growth since this video was made can give a pretty good idea of how sophisticated propaganda can become over time. Especially, if there is already an infrastructure. Like the advertising industry of hyper-capitalistic country (hypothetically).

If one was to watch this video today they would not as easily take the word of this government propaganda film. Propaganda is far more subtle these days. When the media was allowed to run a muck in Vietnam the tide of political opinion changed and the United States government had a war of its own to deal with stateside.

These kinds of propaganda films use to be common but people become immuned to this kind of sentiment. But maybe what they fall for is much more simply constructed lie. The lie that they do not have any political capital. The lie that they should vote in the lessor of two evils and hope for the best.

Previous: The Profits of War
Next: Fireside Chats