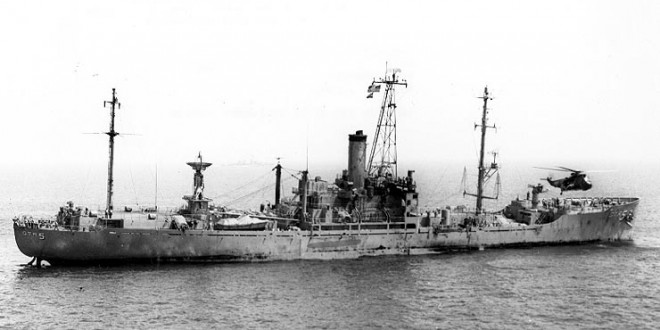 Posted by: karololesiak January 23, 2012 in International

For anyone unfamiliar with the attack on the USS Liberty by the Israeli government in 1967, the video embedded at the bottom will give some background. The USS Liberty was attacked by unmarked Israeli fighter planes and their outgoing radio traffic blocked. The attack was explained away as misunderstanding for the sake of foreign relations (I suspect) but the veterans of USS Liberty tell a different story: 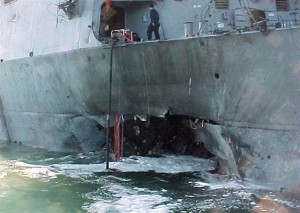 ON JUNE 8, 1967… USS Liberty(AGTR-5) was savagely attacked without warning or justification by air and naval forces of the state of Israel.  Of a crew of 294 officers and men (including three civilians), the ship suffered 34 killed in action and 173 wounded in action.

At 1400 hours, while approximately 17 nautical miles off the northern Sinai coast and 25 nautical miles northwest of El Arish, USS Liberty’s crew observed three surface radar contacts closing on their position at high speed. A few moments later, the bridge radar crew observed high speed aircraft passing over the surface returns on the same heading.  Within a few short moments, and without any warning, Israeli fighter aircraft launched a rocket attack on USSLiberty. The aircraft made repeated firing passes, attacking USS Liberty with rockets and their internal cannons. After the first flight of fighter aircraft had exhausted their ordnance, subsequent flights of Israeli fighter aircraft continued the attack with rockets, cannon fire, and napalm.

During the air attack, USS Liberty’s crew had difficulty contacting Sixth Fleet to request assistance due to intense communications jamming. The initial targets on the ship were the command bridge, communications antennas, and the four .50 caliber machine gun. After the Israeli fighter aircraft completed their attacks, three Israeli torpedo boats arrived and began a surface attack about 35 minutes after the start of the air attack. The torpedo boats launched a total of five torpedoes, one of which struck the side of USS Liberty. 25 Americans, in addition to the nine who had been killed in the earlier air attacks, were killed as a result of this explosion.

It is with the USS Liberty in mind that I post Jim Stone’s email interactions with his readership. The USS Enterprise is set for decommissioning in 2014 making it a diminished asset to the DoD. In 2009 the CNO was hoping to have it decommissioned by 2012. The reader must take all information and decide for themselves. We will stay on top of anything relevant that comes in, but if anyone has any more information about this please relay it to us. At 01:45 “Australian” urges the Coast Guard to recall the Enterprise for an inspection and 01:55 “Andy” mentions that a sequel to the USS Liberty is playing out. This appears to be rumor for now but at the very least it warrants investigation. http://www.navytimes.com/news/2009/04/navy_enterprise_040509w/

Update: “The Enterprise Carrier Strike Group is scheduled to head to the Middle East in March.” Defense Secretary Panetta spoke to the crew this past weekend. He was quoted as saying “Our view is carriers, because of their presence and the power they represent. It’s an important part of our ability to maintain power in the Pacific and Middle East…” If the carrier isn’t leaving until March that would leave the rumored attack stateside which is unlikely. http://www.wavy.com/dpp/military/panetta-addresses-enterprise-sailors

Update: As we have delved more into verifying the sources of information, we’ve found that the sources that have been listed are not as credible as they seemed. The USS Liberty is no conspiracy theory and should not be grouped with the rumored threat in question. The gentleman mentioned at the end of the emails Hal Turner seems to be a known FBI collaborator and runs white supremacist radio show in New Jersey.

In 2006, after he published an attack on New Jersey Supreme Court justices that also included several of their home addresses, state police massively beefed up security for the members of the court, checking on one justice’s house more than 200 times.

On Jan. 1, unidentified hackers electronically confronted Turner in the forum of his website for “The Hal Turner Show.” After a heated exchange, they told Turner that they had successfully hacked into his E-mails and found correspondence with an FBI agent who is apparently Turner’s handler. Then they posted an alleged July 7 E-mail to the agent in which Turner transmits a death threat sent in to his site that targeted Sen. Russ Feingold (D-Wisc.). “Once again,” Turner writes his FBI handler, “my fierce rhetoric has served to flush out a possible crazy.” In what is allegedly a portion of another of his E-mails, Turner discusses the money he is paid.

If this is a threat from a FBI informant there are serious questions here still. Stay tuned.

People send me news tips all the time, but I have not posted one, UNTIL NOW
This came in my e-mail

Andy Jan 23, 2012 1:55 AM USS Liberty 2 Incoming – This is treason, that carrier is due to be decommissioned next year because it’s so old. They’re sending it in there to have the Israelis sink it and blame it on Iran!!

These 1700 souls will be murdered on the morning of the 26th of January 2012 ! That is when Obama is to be sitting in a Georgia Court House trying to prove he is a natural born US citizen . He has been subpoenaed to appear with all his records , birth certificate and papers from the University he attended . I urge the Coast Guard to order the USS Enterprise to halt to be inspected underneath and within for explosives , IF YOU DO NOT , YOU ARE COMPLICIT ! Another 9/11 CANNOT be allowed to happen!

Hal Turner, an FBI Intel Pro expert saw this EXACT plan on the table in September 2006 and leaked it to the public.The USS Enterprise is supposed to be scrapped in 2014 but has 8 Nuclear reactors on board. They said it was going to be a nightmare to decommission so they decided to send it to the Persian Gulf and blow it up and blame Iran. This is verbatim of what he said in 2006, THIS IS WHAT WILL HAPPEN This MUST be stopped!

Previous: Motivation Monday IX
Next: The Power of Nightmares