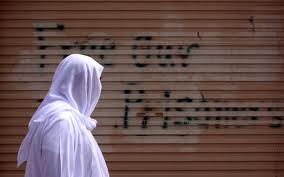 Posted by: karololesiak February 1, 2012 in International

Image from boston.com
Bahrain was the last place I “visited” before I took a very long military flight back to Virginia. The thing that struck me most about the Middle East in general is what I would call a beautiful silence. This silence does not exist in the West and most parts of the East. From the moment we arrived and checked into the base we were skirted and escorted around by plain clothes military personnel that seemed to anticipate a terrorist attack at any moment.
Bahrain is one of the few places in the Middle East where alcohol was allowed. Recently, there has been talk of an overall prohibition. Kuwaitis and Saudis come there to do things they would not do in their own countries. One could not cut the tension with a knife.

The upper elite Arabs that treat Bahrain like Islamic Disneyland are not the general populace. The Al Khalifa royal family, like in Saudi Arabia and Kuwait, is propped up by the West. These are all strategic locations for the treatment of energy as a national defense issue. Going back to the first Gulf War, one can understand the interconnectivity of past conflict. Simply put, Iraq did not want to play ball. The ruling family of Kuwait did.

Skipping ahead to today, the Bahraini uprising has been glossed over because of American interests in the area. That is undeniable. Activists have been: beaten, shot, stabbed, gassed, imprisoned, tortured, that we know of. More recently the Bahraini government has resolved to beat activists that are on hunger strike.

“Political prisoners in Bahrain’s Jaw prison appear to have been subjected to tear gas and beatings after they announced the start of a one-week hunger strike against the government. Fourteen prisoners, who have been handed prison sentences ranging from two years to life, began their strike on Sunday calling for an end to the government’s brutal repression of protests and to what they deem are unfair trials. They were reportedly joined by hundreds of other prisoners as a show of solidarity, while protesters outside the prison walls took to the streets to show their support.”

All of this coupled with the fact that the Obama administration, instead of lodging their famous embargos, has okayed a $53 million dollar arms deal with the rogue state. According to thecable.foreignpolicy.com they might be using a loop hole to go around notifying the public.

“The administration can sell anything to anyone without formal notification if the sale is under $1 million. If the total package is over $1 million, State can treat each item as an individual sale, creating multiple sales of less than $1 million and avoiding the burden of notification, which would allow Congress to object and possibly block the deal.”

The video embedded below gives explicit warning to the police to suppress the Saudi people (who have been protesting in opposition to Saudi Arabia’s deployment of reinforcements to Bahrain).  Much of the footage we used came from Iranian Propaganda television. Sadly, their coverage of the Bahraini activists and Saudi peoples protest  is better than that of the mainstream Western media. Guess who arms the Saudis? On Febuary 12th UK will be marching in support of Bahrain there are many marches being organized all over the world in support of the Bahraini people. The Manama Document gives basic humans rights demands of the population of Bahrain.

The majority of people and mainstream opposition groups desire to see burgeoning of democracy whilst maintaining the monarchy under the slogan of “people want reform of the system.”  Proceeding upon the seven principles spelled out by the country’s crown prince on 13 March 2011, demands of the people can be summed up as follows:

1) An elected government representing will of the people rather than an appointed government.  Through their elected representative, people can cast vote of confidence to the prime minister, other ministers prior to assuming their jobs and have the means to withdraw granted confidence should they fail in their duties.

2) Fair electoral districts guaranteeing political equality amongst the people and meeting the universal principle of one person, one vote.  At the moment, the current 40-member electoral system is malfunctioning by virtue of dividing the country along sectarian lines, and producing a chamber comprising of loyalists of the regime.  In realty, each of number one district in northern and central governances plus number nine district in the northern governance, boasts some 16,000 voters.  Conversely, the same numbers of voters in the southern governorate, known for being a loyalist to the regime, can equally elect 6 representatives.

Concurrently, a call is made for establishing an independent commission for administering the election process rather than being dominated by the state through justice ministry and statistical agency.

3) A parliament comprising of a single chamber having sole legislative and regulatory powers, replacing the current bi-cameral arrangement, one elected and the other appointed.

4) A trustworthy judicial system independent from the executive branch both financially and administratively.  The judicial system must act in transparent ways and serve as an impartial entity and show willingness to look on all cases including possible assaults carried out by members of security forces.

5) Security for all via participation of all walks of life in the country in formation of the army and other security apparatus on the basis of providing security for all, and trained to show respect for human rights at all times, rather than serving wishes of the government in suppressing the opposition.

These demanded reforms stipulate setting up a new constitutional formula, in turn requiring approval of the majority of people via either an elected constituent assembly or a popular referendum.  In retrospect, the crown prince has embraced the notion of the referendum whilst announcing his 7 principles on 13 March 2011.