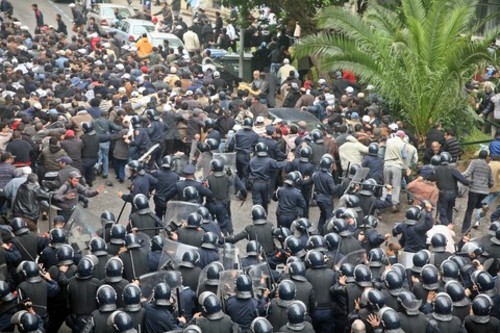 Posted by: karololesiak February 3, 2012 in International

According to our friends at Occupy Spain and CNN, violent suppression resulted in a media blackout in Morocco. The city of Taza, close to Fez, burned last night in an altercation between police and citizens. Police have been invading citizens’ homes without any discrimination as to who is an activist and who is not.

From Occupy Spain: News on Morocco- The city of Taza near Fez burned last night, due to struggles between citizens and corrupt police, hell bent on surpressing any revolutionary social activism. Several young activists killed by police brutality. People’s homes violently invaded by police. There is a near total media blackout in Morocco, instigated by the King and enforced onto other agencies, in order for the seriousness of the situation to remain covered up. But it will not remain so indefinitely. Citizens now finally have the courage to shout “Long Live the People” instead of the obligatory “Long Live the King”.

“Unarmed protesters and non protesters alike have been indiscriminately beaten senseless and their doors kicked open, arrested, raped and whipped before the watching eyes of their children/parents/spouses.

Moroccan riot police, regular police AND ARMY have been dispatched to the city from all neighboring cities and military bases.”
-CNN iReport

The  Moroccan war machine has been unleashed upon its people. One year ago the mainstream media slept on Moroccan cries for justice. The media blackout is looming while police and army abuse citizens. When I say blackout, I mean that quite literally. There have been reports of police shutting off electricity. The protesters have been out in the streets for a year while the king has been promising reforms. Leaving his own power intact, he has fallen short of appeasing his peoples’ cry for help. The Moroccan people demand a functioning economy and political reforms.

You can view footage from Morocco in the three videos below: