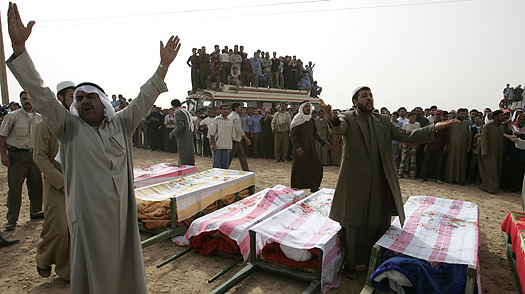 Posted by: karololesiak February 4, 2012 in International

Yesterday, 200 men, women, and children were slaughtered by Syrian butcher Bashar al-Assad when a portion of his army joined the activists of an 11-month movement. On the the 30th anniversary of the Hama Massacre, where thousands of innocent Syrians were dematerialized by Assad’s father. 40 civilians died in the first half hour. The UN Security Council is deadlocked awaiting a resolution. China and Russia frame interference as meddling in a civil war. When the military members went to join the people, Assad’s tanks opened fire on everything. These are not rubber bullets, folks, these are mortar rounds and tank shells. The carnage is unimaginable. Like in other pressure zones we have observed through the course of the Arab Spring medical attention cannot get in or out.

“The Obama administration has called upon the U.N. Security Counsil on Saturday to act for the sake of the Syrian people.  President Obama said Assad acted with “disdain for human life and dignity…(that Assad)…has lost all legitimacy with his people…”

Rallies against Syrian embassies have broken out all over the world. The hurling of stones and arrests are rampant.

“In London, about 150 people hurled stones at the Syrian embassy, smashing windows and shouting slogans…Syrian residents in Kuwait broke into the embassy there at dawn on Saturday, tearing down the flag and injuring several security guards…embassies in Germany, the United States and …Cairo…”

The video embedded below shows a brave Syrian journalist humbly saying that it is those who die trying to retrieve the already fallen who are the brave. The Syrian people demand our attention. How can one not look or stop to marvel at their bravery? The severe blockage in the U.N. right now is coming from China and Russia who are reluctant to allocate resources. RT, as usual, is trying to spin this as a precedent to sovereignty. The Obama administration has a good point. A butcher who uses his military technology to wage war against his own people is like an abusive parent. Only in this case, Assad should be put in foster care.

THE WHITE HOUSE Office of the Press Secretary

Statement by the President on Syria

Thirty years after his father massacred tens of thousands of innocent Syrian men, women, and children in Hama, Bashar al-Assad has demonstrated a similar disdain for human life and dignity. Yesterday the Syrian government murdered hundreds of Syrian citizens, including women and children, in Homs through shelling and other indiscriminate violence, and Syrian forces continue to prevent hundreds of injured civilians from seeking medical help. These brutal killings take place at a time when so many Syrians are also marking a deeply meaningful day for their faith. I strongly condemn the Syrian government’s unspeakable assault against the people of Homs and I offer my deepest sympathy to those who have lost loved ones. Assad must halt his campaign of killing and crimes against his own people now. He must step aside and allow a democratic transition to proceed immediately.

The Syrian people demonstrated in large numbers across Syria yesterday to participate in peaceful protests commemorating the 30th anniversary of the Hama massacre. They labeled the protests, “We are Sorry, Hama – Forgive Us.” We owe it to the victims of Hama and Homs to learn one lesson: that cruelty must be confronted for the sake of justice and human dignity. Every government has the responsibility to protect its citizens, and any government that brutalizes and massacres its people does not deserve to govern. The Syrian regime’s policy of maintaining power by terrorizing its people only indicates its inherent weakness and inevitable collapse. Assad has no right to lead Syria, and has lost all legitimacy with his people and the international community.

The international community must work to protect the Syrian people from this abhorrent brutality. Earlier this week, our Arab partners called on UN Security Council members to take action to support a political solution to the crisis in Syria and stop Assad’s “killing machine.” The Council now has an opportunity to stand against the Assad regime’s relentless brutality and to demonstrate that it is a credible advocate for the universal rights that are written into the UN Charter.

We must work with the Syrian people toward building a brighter future for Syria. A Syria without Assad could be a Syria in which all Syrians are subject to the rule of law and where minorities are able to exercise their legitimate rights and uphold their identities and traditions while acting as fully enfranchised citizens in a unified republic. The United States and our international partners support the Syrian people in achieving their aspirations and will continue to assist the Syrian people toward that goal. We will help because we stand for principles that include universal rights for all people and just political and economic reform. The suffering citizens of Syria must know: we are with you, and the Assad regime must come to an end.