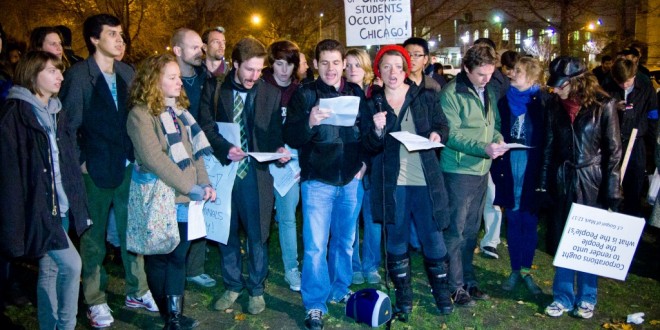 Posted by: patrickgokey February 6, 2012 in Occupy

On February 1, 2012, Chicago school Roosevelt University announced a new political science course based on the Occupy Movement will be offered on their campus this semester. This is a great chance for current Occupy Chicago members to gain a deeper understanding of the movement and will hopefully motivate students who have had no prior interaction with the Occupy Movement to learn about its roots. View the announcement below:

“A new course exploring the Occupy Movement and the political-economic order it is challenging is being offered this spring at Roosevelt University’s Chicago Campus.

Thirty-two undergraduatres [sic], including several who are involved with Occupy Chicago, are taking the course, Political Science 390, Special Topics in Political Science: Occupy Everywhere, with Jeff Edwards, associate professor of political science and an expert in social movements.

“It is exciting and timely to look at a movement as it unfolds in its early years,” said Edwards, who got the idea for the course in response to the ongoing debate in America’s academic political science circles over the impact that growing socio-economic inequalities are having on U.S. democracy.

During the course, students are reviewing literature, essays and articles about the Occupy movement that began in 2011; they are looking at considerable research that’s been done in the area of socio-economic inequality and democracy; and they will be doing their own research on various aspects of the Occupy movement.

According to Edwards, various aspects that could be studied could include: historical comparisons of Occupy to other social movements; racial dynamics of Occupy, including how the movement allies itself with other communities and causes; Occupy as a global movement, and its potential for changing politics globally; Occupy’s future, including strategies/directions that the movement could take in the future; and Occupy’s potential impact on the 2012 U.S. presidential election.

The Roosevelt course is not the only one of its kind. For instance, New York University’s Department of Cultural and Social Analysis is offering a course this spring called “Cultures and Economies: Why Occupy Wall Street? The History and Politics of Debt and Finance” and Columbia University in New York had planned, but decided not to offer, “Occupy the Field: Global Finance, Inequality, Social Movement,” as the course has not been fully vetted by Columbia administrators.”