Home » International » Russian Soldiers’ Mothers for the Cause 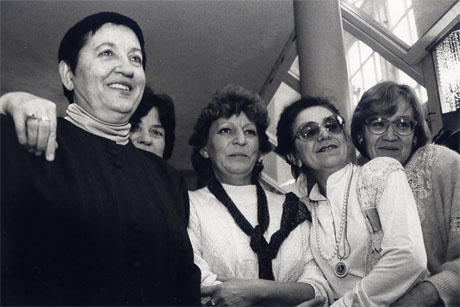 Russian Soldiers’ Mothers for the Cause

Posted by: karololesiak February 9, 2012 in International

Union of the Committees of Soldiers’ Mothers of Russia (CSMR) was founded in 1989 and officially registered the same year by 300 mothers of soldiers, whose initial aim was to campaign for their sons to return home early from military service in order to resume their studies. They succeeded in bringing home nearly 180,000 young men for this purpose.

The mothers had been horrified by what they saw and learned about conditions in the armed forces: the regular beatings, abuse and humiliations, the lack of food or other necessities, the effective slavery imposed in the ‘construction’ battalions which comprised about 30 per cent of military manpower. Their demands were for thorough reform of military structures, reform of the armed forces on a democratic basis, an end to forced labour in the construction battalions, demilitarisation on the justice system, the establishment of effective civil control over the military and legislation to provide for an alternative civil service.

In 1990 some of these demands, including partial demobilisation of the construction battalions, were conceded by President Gorbachev, but in general the situation did not improve. CSMR set up a Rehabilitation Centre for soldiers who left the army for health reasons. Its activities expanded and diversified to include the organisation of human rights education for conscripts and their parents, dealing with individual complaints concerning human rights violations, regular inspections of military units, the working out of legislative proposals and the organisation of non-violent public protests.

In November 1994 the war in Chechnya broke out and, as CSMR put it, “the peaceful time for the Committee was over”. They opposed the war from the start, both in itself and for the threat it posed to the new Russian democracy. Their new activities included dealing with individual complaints from soldiers and their mothers, running a weekly ‘School for Conscripts’, supervising the special military unit for the rehabilitation of so-called ‘deserters’, which is under the aegis of the CSMR, as well as participating in working groups of the State Duma (parliament). In the first six months of the war, the Committee received letters from up to 200 people a day and in the same period nearly 10,000 people brought their complaints in person.

Hundreds of mothers organised by CSMR went to Chechnya to take their sons away from the war. They negotiated with the Chechen army and obtained the release of ‘prisoners of war’. CSMR organised a remarkable ‘March of Mothers’ Compassion’, bombarded the Russian government with statements and petitions, and campaigned for the young men who refused to serve in Chechnya, declaring themselves conscientious objectors. Most controversially, they started a campaign encouraging mothers to support the right of their sons to refuse military service – and they travelled abroad to support the idea of an International Tribunal on Chechnya.

The founders of CSMR were five women – two engineers, a journalist, a teacher and an economist. An all-volunteer organisation with no regular budget, CSMR now acts as the umbrella group for 50 regional organisations of soldiers’ mothers and liaises with others. In 1995, CSMR received the Sean MacBride Award from the International Peace Bureau and an award from the Norwegian Committee on Human Rights.

In the late 90s and beginning of the new millennium the Soldiers’ Mothers have been trying to prevent anti-democratic changes in the Russian military legislation demanding the immediate abolition of involuntary conscription, which ‘makes the army the source of threat to people and society, the source of social tension in Russia’.

In 2003 the Soldiers’ Mothers began a campaign for negotiations with commanders of Chechen armed formations. In 2005 they negotiated in London with representatives of the Chechen side. The ”London memorandum”, which was signed by both sides, called, among other things, for European participation in the constructive settlement of the Chechen crisis. It is CSMR’s intention to broaden the circle of participants in negotiations on peace in Chechnya. 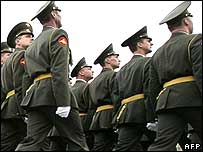 In one of the military units situated in small town K. something happened in September, 2002. The loaded with armaments military truck disappeared. The commander of the unit decided to solve a case with the most simple means. He formed up all the soldiers who, at the moment, were free of duty, and began to beat them with the spade-stick. He beat the first five soldiers in the row for three hours and then declared that he makes interval for lunch. He promised to continue beating after lunch till he finds a thief.

54 soldiers decided not to wait continuation of commanders’ investigation. They left the military unit, leaving behind only those soldiers who were on guard. For them to leave their posts meant to do serious military crime.
54 soldiers marched 90 kilometers from K. to Volgograd — the capital of Volgogradskaya oblast (one of administrative regions in Russia). In the night they slept in the forest. They have nothing to eat. Nobody asked them what they are doing without officers. Nobody chased them. They enter Volgograd in the afternoon of the next day. The soldiers did not know address or telephone of soldiers mothers organization. But they were convinced the mothers will save them. Somebody helped them to find the office of soldiers mothers committee — Mothers’ Right with the chairwoman Tatiana Zazulenko.

After that solution of the case transformed into the matter of HR technologies. The soldiers mothers took from every soldier two statements — one, addressed to the organization with their request to intervene, and the second one — to the military prosecutor whose duty is to observe the laws. They also sent the list of soldiers to the Moscow office of the Union of the Committees of Soldiers Mothers of Russia (UCSMR) together with description of events. It was decided to leave the soldiers to sleep in the «Mothers’ Right» office and next morning to march to the prosecutor together with soldiers mothers. The members of organization somehow managed to give food to all exhausted boys and called a doctor to confirm the beating traces. 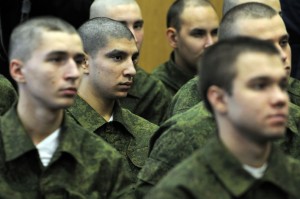 Early in the morning the women returned to the office. To their surprize it was empty and evidently after chaotic search. Some documents were missing, some equipment did not function. Soon the mothers found that soldiers were taken back to their military unit deep in night packed in several military trucks. The mothers came to the prosecutor with their statements and demanded to investigate the case. They called journalists and organized the press-conference. In Moscow the UCSMR did the same. Their interviews were shown on TV channels. The intentions of military to hide the case failed. In the end the special military command of high rank officers from Moscow had to be sent to investigate what is going on in the K. military unit. The Main Military Prosecutor in Moscow received the official letter from UCSMR concerning unlawful events in K. and was involved in the case.
The investigation concerning truck stealing and beatings is continuing. The commander of the military unit already lost his post. The soldiers were not punished for the so called «deserting». The soldiers mothers are waiting for investigation results to give them publicity.

It was the first case of soldiers organized deserting from the military unit of such scale. The case shows very clearly that the only possibility for soldiers to protect their HR is support of HR soldiers mothers organizations. By their estimate, up to 40 thousands «deserters» are hiding all over the country trying to save their life and health. The UCSMR will continue to demand immediate abolishment of involuntary conscription.
At the beginning of December sixteen soldiers left one of the military unite. They came to the Union Committees of Soldiers Mothers of Russia for help…

Previous: The Immeasurable Costs of a War
Next: Watch Andrew Breitbart Flip Out On Occupiers