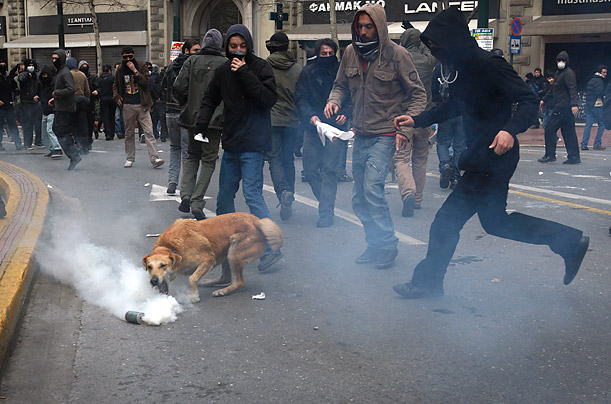 Image: A can of tear gas lands near Loukanikos and protesters, February 2011. GIORGOS MOUTAFIS / ANZENBERGER

Motivation Monday XI, along with our wishes for prosperity, goes out to the Greeks in the street. In July of last year an unlikely symbol of the Greek riots emerged. It is astonishing how something like a loyal dog can reaffirm that all is right in the universe. Loukanikos, meaning ‘sausage’ in Greek, was visible engaging with activists against the police. The dog seems to really believe in the cause, biting and growling at riot police. Loukanikos understands that the Greek people did not incur debt, the Greek government did. The recent scenes from the street are filled with fire and violence. Loukanikos has not made an appearance as of yet. We hope he stays safe. “Histories are more full of examples of the fidelity of dogs than of friends.”-Alexander Pope