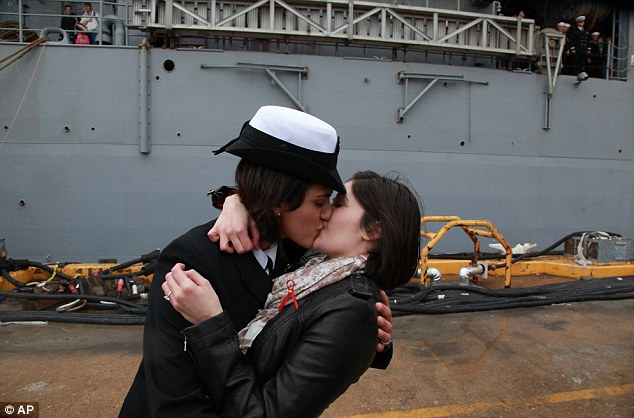 Posted by: karololesiak February 14, 2012 in Occupy

On this Valentine’s Day we must acknowledge how love has changed in the modern day. Whether you agree with gay marriage or not, the issue has landed in the back yard of all Americans. Several states have already acknowledged the rights of LGBT Americans. If you need an example of how this translates into economic stimulus all you have to do is look at cake sales in San Francisco (before rights were again repealed).

In my time in the Navy the LGBT active duty community was always recognizable and never talked about. Having observed a young man (we will call him Sean) transgress through the military as undeniably and admittedly, gay, I would like to share some of his story.

He was not in my division in Boot Camp. But I remember Sean because every time he opened his mouth everyone would turn their heads. RDCs would make him sound off in order to shame him in front of the rest of his division. In the mess hall leadership would place him at the turnstiles to greet people. Boot Camp had controlled hazing. Hazing was more subtle in the modern training ground.

Through, what I am sure was a ton of abuse, Sean, graduated from Boot Camp and what is called “A” school. We were stationed on the same command and even though I had observed his sufferings for the last 5 months I never exchanged a word with him. Sean encountered new abuse at our new command from leadership and peers. But about the second year something changed.

The division he was in started to accept him because of his work ethic. When another division would try to tease Sean, a gang of his ship mates would come to his rescue. Sean and the members of his division started joke uneasily about his orientation and overall gentle demeanor. When Sean was having hard times and wanted out of the Navy he tried to use his sexuality to get kicked out, his chain of command would not allow it.

Sean had become too important to his unit for his sexuality to matter. It was Sean’s struggle that defined his character. His inability to project any other image than his genuine self made him a strong addition to his division; they put their lives in his hands. The question has been asked whether a homosexual person  is as good of a soldier as a straight person. I would say, there is a strong possibility that LGBT are sometimes better. Happy Valentine’s Day.