The Global War on Terrorism Service Medal is a military award given to service members who served after September 11th, 2001 for a period of either 30 consecutive or 60 non-consecutive days. On May 20th in Chicago members of the antiwar war group Iraq Afghanistan Veterans Against War decided to give this particular award back. During the NATO/G8 summit nearly 50 veterans threw their campaign medals for participating in The Global War on Terrorism away, in ceremony, and lead thousands of activists through Chicago. Nathan Toth, a Navy veteran,  was among those activists. This is his first person narrative of what happened on that day and what lead him to return his medal.
This article first appeared on May 25th, 2012 on IVAW.org: http://www.ivaw.org/blog/marching-daylight

On Sunday, the 20th of May, 2012, a few dozen veterans of the wars in Iraq and Afghanistan marched down Michigan Ave in downtown Chicago to return their service medals to NATO generals. NATO was having a meeting at the McCormick center a couple blocks away from the intersection of Michigan and Cermak. 60 heads of state and all of the high ranking NATO generals were on hand for this meeting. Iraq Veterans Against the War helped organize the march that included several thousand people (media reports place the number at roughly 2000, but it looked more like 20,000). At the front of the march was Jesse Jackson, three members of Afghans for Peace carrying an Afghan flag, two members of IVAW carrying an American flag, and the mother of a soldier who committed suicide while in the country. Behind them were 4 columns of IVAW members. All branches were represented and all years of the wars. From the invasion of Afghanistan to the invasion of Iraq to a deployment to Afghanistan that ended in 2011, IVAW members have been involved in these wars from day 1. And all of us have concluded that these wars were wrong and have done more harm than good.

I served in the US Navy during the initial invasion of Afghanistan and Iraq aboard the aircraft carrier USS Theodore Roosevelt CVN-71. During the invasion of Afghanistan, the Roosevelt spent 159 consecutive days at sea conducting air operations over the country. These were primarily night operations. We dropped millions of pounds of ordinance on a wide variety of targets. Tanks, fuel trucks, cave openings, houses, shops, pickup trucks, junked planes, and random chunks of desert. 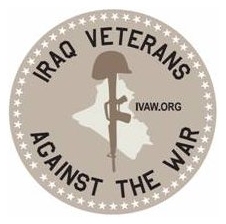 I was an electrician who maintained a wide variety of shipboard electrical equipment. I worked hard, was good at what I did, was a good example to my fellow sailors, and helped in the technical development of dozens of my fellow shipmates. My abilities were respected by the officers and Chief Petty Officers of the Engineering department and I was looked at as a good sailor. I fully embraced the Navy values of Honor, Courage, and Commitment.

I made Petty Officer Third Class after about 2 years in. Scored really well on my test and had a good evaluation. And I made Petty Officer Second Class in April of 2003. Also on an amazing test score and a near perfect evaluation. During the deployment in support of the invasion of Iraq, I had become an amazing electrician and was commended numerous times by the ship’s Captain. I really had my shit together. Shiny boots and all. And then I got out.

I couldn’t take it anymore. In 2005, 2006, and 2007 I contemplated suicide numerous times. Stress was literally killing me. And no amount of alcohol can wash way the tears of a child whose father died at too young of an age.

In 2006, I discovered IVAW. These people were like me. They hated war. They lost friends. They hurt inside. Some of them were combat veterans, unlike me. But I learned that my service was just as critical as theirs. We were all gears in the machine, each with a different purpose, but gears nonetheless. These guys and gals gave me space to cry and grieve and heal and share my thoughts and speak out. And they exposed me to ways of making amends. 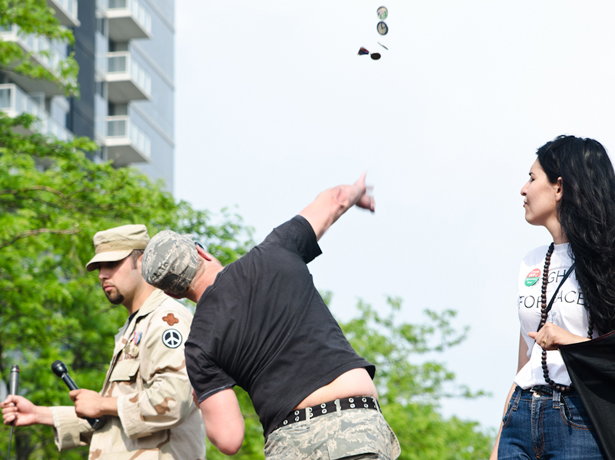 A member of Iraq Veterans Against the War throws his medals across the security fence surrounding the NATO summit site as Suraia Suhar of Afghans for Peace looks on. Nearly 50 veterans returned their medals in a protest on May 20. (Photo by ZD Roberts, GregPalast.com/PuffinFoundation)

We marched to make amends. With ourselves, with Afghan women, with American citizens. We marched to make a powerful statement, an earth rocking statement. Something that people would cheer us or decry us for. Our voices WILL be heard. We will air our frustrations with these wars, the mental health crisis within the active duty and veteran ranks, the suffering of the Iraqi and Afghani people, and the unfair economic conditions worsened by spending $3 trillion on war over the past 12 years. We want to return our service medals to the NATO leaders who sent us into a hell that we will never leave, but if they won’t accept them, we will throw them back.

As it turns out, NATO did not send a representative out to receive our Global War on Terror Service and Expeditionary medals, or other medals and tokens of war. So we tossed them into the street aiming at the McCormick center. Who knows what became of them; maybe collected by the cops, or swept into the sewers. It was a deeply emotional ceremony. Much more emotional than anyone could have imagined. As the American flag was ceremoniously folded while taps played, I broke down. A lot of us did. It was really powerful. That flag was presented to Mary Kirkland, mother of Derek Kirkland. Derek was a soldier who committed suicide after repeatedly reaching out for help.

So much of this war has been in the dark. Some of it literally in the dark of night with 2am raids, but in the dark to the American people. The suffering of the Iraqi and Afghani people, the utter destruction of those countries, the pain that veterans live with, the loss that families feel when a loved one doesn’t come home (physically or mentally), and the stress of repeated deployments are all things that have been hidden from Americans. IVAW marched and threw these issues into the daylight. And for that, our society has seen the ugly and painful side of 11 years of war.

Previous: The Power Principle – An Interview with Filmmaker Scott Noble
Next: The Last Social Program