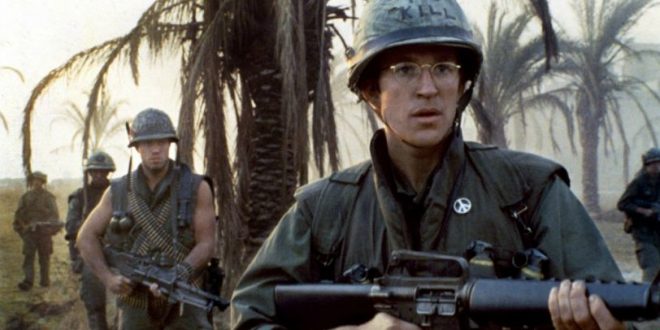 Marines pass a joint to one another in the dark void of southern Afghanistan and, in crackling night-vision green, the question arises: Did they think they would ever be stoned within range of enemy fire?

War is a bitch.

It takes the human soul, puts it through a grinder, and spits out a ripped and battered pit of despair. But we don’t talk about this.

We don’t talk about this because we already know it happens. Both implicitly and explicitly we know what war does to people. We have even seen the results when warriors return home. To talk about gives war more life than it should have.

However, a filmmaker and Marine (there are no former Marines), Miles Lagoze shows what war is truly like on the front lines. The fear and anxiety, the coping mechanisms, and the general feel of a combat deployment.

But we don’t talk about this.

We don’t talk about this because the US Marines knows it happens, but to see the truth will probably reduce recruits and public support. We need to see the “good” side of war to keep our moral high ground.

Ironically, the Marines did try to block this film. “Combat Obscura.” They tried their best and ultimately let it slide (for now). It’s likely that the Marines don’t really care and that there is a certain aspect of society that is drawn to and fascinated by the real side of war.

The thing is, have you heard of this film? No. Exactly. It’s because we already know what goes on behind enemy lines, and we have all just agreed not to talk about it.

And we are fine with that.

Matthew Baker is a veteran of the United States Navy and was stationed aboard the USS Ronald Reagan from 2002 to 2006. He holds a Doctorate in Education from the University of Oklahoma. Baker has worked as a reporter and photographer for The Purcell Register in Purcell, Ok, and is currently teaching English and Journalism to high school students in Norman, OK.
Previous: Radicalisation
Next: Agent Orange Monsanto Vigil