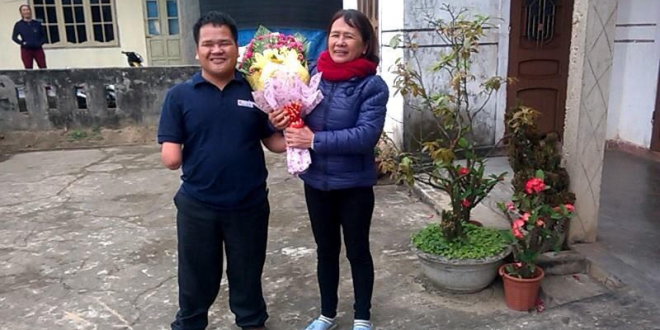 Lai presenting flowers to his mother. He is a victim of the gene-warping chemical dioxin, contained in the toxic herbicide Agent Orange, used by the U.S. during the Viet Nam War. Lai was born with no legs (he is able to walk with prosthetics) and only one functioning arm and hand. He will be a member of a November 2019 delegation of war victims to a peace conference in Washington, DC.

August 10 is Agent Orange day, Veterans For Peace San Francisco Chapter 69 invites you to a vigil against unethical corporate ‘practices of Monsanto who is also responsible for the manufacturing of Agent Orange. Monsanto, who recently lost a lawsuit for 2 billion dollars, indicating pesticide involvement in the occurrence of cancer, denies responsibility for the governments use of pesticide on the Vietnamese. Monsanto has also been implicated in colony collapse of bees around the world and predatory practices with intellectual property on genetically modified seeds. Recently, Monsanto was bought by pharmaceutical giant Bayer making it even less likely to be held to account.

VFP, the only veterans organization recognized by the United Nations, also has a chapter in Hoa Binh, VFP CH 160, that is dedicated to assisting the victims of Agent Orange in Viet Nam. Each year VFP CH 69 organizes an educational, cathartic, fundraising trip to Vietnam raising money to help victims.

I certainly hope you feel as I do that we owe this courageous young man. And I hope you’ll come to Union Square, Sat. Aug. 10th Noon to 2 pm for the “Monsanto Vigil” on International Agent Orange Day. – Nadya Williams – VFP

For a riveting read, please refer to the two-part article written by Seul Jones, who lives and works full time in Viet Nam with the victims of Monsanto and the US government.