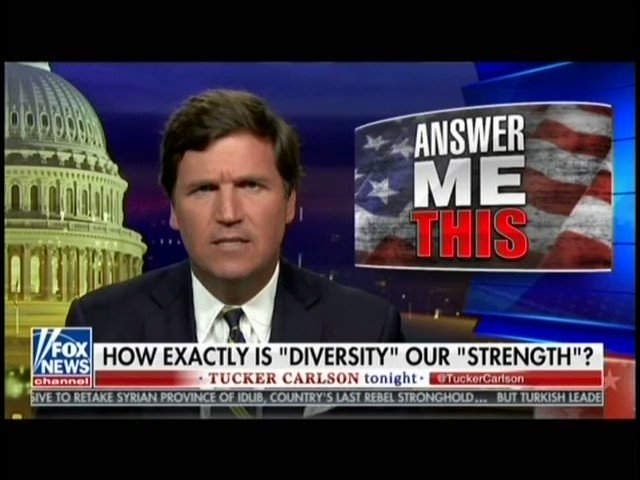 I don’t know smart people who call people stupid. Tucker Carlson’s talking points usually have a lampooning target. Fox News has been the most popular news network in the country since 2014 and in the lineage of the disgraced Bill O’Reilly there is always an attempt to position viewpoints as if they are outliers.

Carlson masquerades as provoking thought but delivers packaged antagonisms that delegate the opinions of his audience back to them. Listening to a whole show devoted to the pedantic idea challenging the concept of quarantine without providing any alternative left me exhausted. Unfortunately, we have never come up with a better idea than sequestering ourselves from the disease.

Among the talk show hosts greatest oped hits: 1. rioting is bad 2. people who think that rioting is bad are good 3. climate change is a hoax. His “debate” with Bill Nigh the Science Guy is a ritualistic testament to his pursuit of low hanging fruit. Formulaicly, he usually has a couple of good points but his whole demeanor is unacademic rebellion without a clue.

I think there is a kind of demagoguery that seeks to harvest an audience rather than evangelize one. Win hearts and minds. Tucker Carlson is such a charlatan. It pains me to think that he is perceived as legitimate. He is a spin doctor that takes advantage of ignorance. I don’t believe he believes the things that he implies.

When Carlson last year implied that white supremacy was a hoax and not a legitimate concern in our obviously apartheid state. Conor Friedersdorf Staff writer at The Atlantic said:

And apart from the omissions, the segment was riddled with reasoning so inane, one wondered if stupidity or sophistry was the more charitable explanation.

Carlson has always stood in opposition NFL players kneeling and Colin Kaepernick’s Nike endorsement deal. So his program is now doubling down and focusing on only the negative elements of the George Floyd protests. Showing video clips resembling black friday at Walmart.

Last year, Jon Colbert called Carlson’s face as the most effective form of birth control. SNL parodies him as a tool that segways right-wing fools that he deifies. Intellectual dishonesty is his mortal sin but he does sometimes say things that make sense. I think he is aware of being embedded but like all other demagogueries, it’s his audience that I would seek to understand. I thinking pressed against a wall or in court he would defer to being an entertainer.