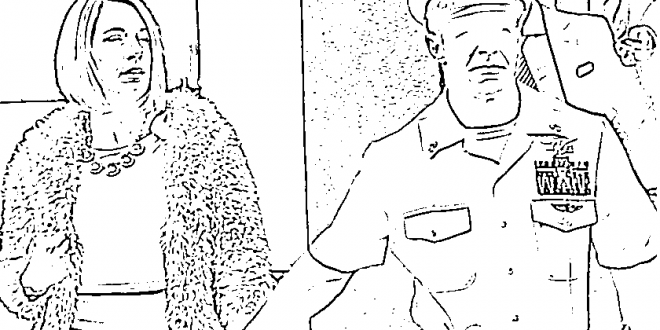 In an early interview in San Diego Andrea Gallagher and Sean Gallagher, the brother of a Chief that is now convicted of taking a selfie with a corpse, they both looked like they had been worn out by the other accusations of war crimes. Chief Gallagher had reached retirement age, many chiefs stay in longer, the combat fatigue is obvious even if he got acquitted of everything else besides that. Normal people don’t act that way. Chief Gallagher had been deployed most of his career. Andrea and Sean Gallagher have no idea what they have unleashed on themselves and on us. Chief Gallagher’s seal team knows him better than anyone. The interviews of his comrades released by the New York Times are daunting they call him “evil.”

When trump overruled Cheif Gallagher’s UCMJ punishment, in pictures, Andrea and the Cheif were dressed to kill. They look victorious. He looks dominant. At all the court appearances she had taken the opportunity to look her best. In pictures, his hand was always consuming hers contorted in flex plunging down. He was always several steps ahead of her but they look like they belonged together. She doesn’t look scared of him. Domestic abuse has never been alleged. In a situation like that, it’s quite possible that she is the dominant one. He just liked what he did I little too much but everyone is performing to someone.

Not too long after, Chief Gallagher took revenge on fellow seals who had spoken out against him by publishing names, photos, duty status, and service units of SEALs. In the early San Diego interviews Andrea and Sean had noted that the voices that came out against the chief were disgruntled because they did not perform well. I could tell that this is the explanation from the horse’s mouth. Imagining where that conversation took place isn’t as hard as when it took place. Hard to imagine whether the disclosure was preemptive or post hoc.
When two people come together it relieves social tension. The two start to perform for each other. It’s his interpretation of what I think he thinks she wants that is deeply troubling to the heart. Her character says something about America’s propensity for false dichotomies. Support the Troops stickers on the back of SUVs and Minivans: rationalizations for war that look like we can either reward or punish someone for enjoying war a little too much. It becomes a cult of war where careers such as these are the last social programs where there is any kind of social mobility. Where staying perpetually childish is a prerequisite because those are the only places where rationalizations for war still reside.
In the Instagram video posted by the Gallaghers. Chief calls his detractors cowards. He was only convicted of taking a selfie with a corpse. In the interviews, his compatriates do look scared — I suspect the person calling them cowards is the one terrifies them. I suspect that is why they decided not to testify. To look at the world sheerly in terms of heroes and cowards digest an enemy by internalizing. What lovers of low hanging fruits enjoy about war have to do with power and status.