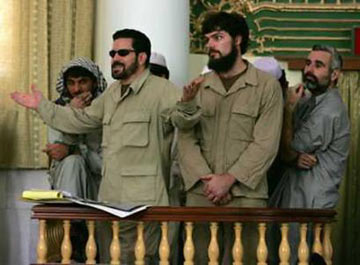 Watch: The King of Stolen Valor

Oki’s Weird Stories finally made a documentary that’s relevant to us. The youtube channel has produced documentaries such as Thierry Hill cult, The Secret Space Program conspiracy theory, and the “gay frogs” rabbit hole. Jonathan “Jack” Idema’s was heavily influenced by Soldier of Fortune Magazine. Idema accredited the magazine for having become a green beret. We here strive to be the opposite of fetishized toxic masculinity like Soldier of Fortune.

Jack Idema was convicted by the Afghanistan government of torture and false imprisonment when he was granted amnesty he refused to leave prison. The American government distanced itself from Idema in the wake of Abu Grav. What Oki’s documentaries do well is uncover the anthropological significance of the cult of personality surrounding a story. Oki’s most successful documentaries revolve around cults and this one reveals a micro religion that commodifies the military industrial complex as an reverberation of a performative crusader mentality spinning into spectacle.

Idema died in 2012, Bacalar, Quintana Roo, Mexico his occupation was vigilante but Oki’s documentary suggests he was more of a swindler in collusion with an offset of the military industrial complex — having had a relationship with Soldier of Fortune Magazine’s leadership. Idema was responsible for Hoax Al Qaeda Training footage played across major news platforms. His influence on the War on Terror cannot be understated.