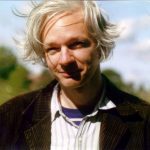 It’s been over a week since the announcement that Julian Assange will be extradited to the US to be charged for espionage against a country he doesn’t have citizenship in. Assange is being indicted under The Espionage Act but the charges rely on conspiracy the Racketeer Influenced and Corrupt Organizations Act (RICO). Originally used to prove collusion between organized crime ... END_OF_DOCUMENT_TOKEN_TO_BE_REPLACED