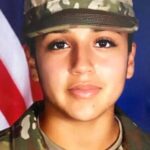 Vanessa Guillen was bludgeoned with a hammer, on base, in the armory, her remains were removed in a box. Several people saw, now deceased due to suicide, Aaron Robinson struggling with the box the night Vanessa disappeared. Guillen was a private and Robinson was a specialist. They both worked in the armory but in the army that small rank difference means a lot, and many, (if not most) exploit that. END_OF_DOCUMENT_TOKEN_TO_BE_REPLACED