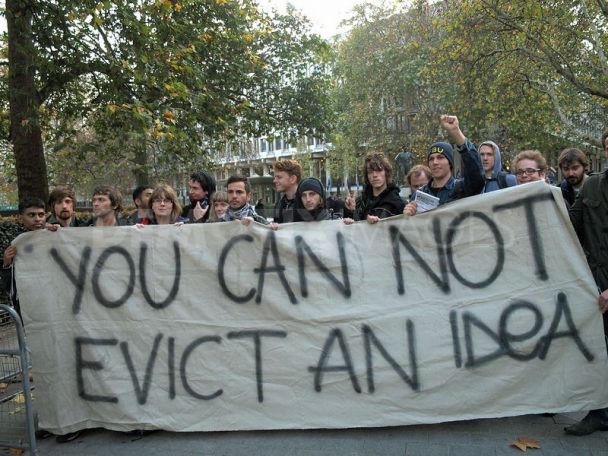 It has been very aptly said: “You cannot evict an idea.” What I’ve observed through the night and through today in Manhattan reaffirms my belief that the symbolism of Occupy Wall St. is far more important then the physicality of it. We live in a very non physical time. Credit card transactions, arbitrage, virtual real estate, non-places (that look the same as geography changes). We are born in hospitals (outside of nature) and we die in hospitals. The metaphor at its bare bones encompasses the time we spend in between.

History has lead us to a technological inevitability. Direct Democracy could have existed with the invention of the telephone but instead it formed corporate monsters. With the onset of the internet, generations of the now want to use that virtual space as an extension of that Democracy. That space has always been precious that is why the telephone giants of yesterday, the cell phone giants, and cable giants of today collected such huge returns. We were convinced that the right to talk amongst ourselves wasn’t ours. Communication isn’t a discovery or a business it’s an evolutionary inheritance of language. Already the the flow of mimetic chatter is burning up the inter-connectivity of the world. And the dinosaurs of this world cannot see all spaces that have been created. They are still stuck in some cause and effect logic from a near but very distant past. And those monsters don’t always know that they are monsters.

This country was formed on conception of space. Property ownership in the land of open spaces was Democracy. After the housing crisis  real space was taken away from us. But we realized that real space is arbitrary beside the idea of Democracy, ideals of justice, that do not exist in actuality. There is an obsession with material realism in the name of the search for truth. But truth like everything else in our Universe is emergent.  And narrative truth is rarely true. Metaphorical truth can reach the same precision as physics not because it’s more real but quite the opposite. It is not physics that manifests this world of ours of space and technology. 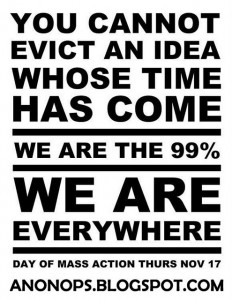 The world that gives us life and takes it in the vacuum of institution is built specifically out of our psychology. Sometimes out of our nightmares instead of our dreams. It is not perfect and ordered like the world of classical physics. The more we perfect our psychology the more perfect the space we create with it will be. The only good argument I’ve heard against direct democracy is the manipulable voting machines that were in the news a couple of years ago. But I would make the argument that 100 senators, 435 representatives, and countless state legislators are far more corruptible. We have chosen between the lessor of two evils for too long. Part of the two evils to chose between are socialism and capitalism. Neither of which work. The cold war made people very zealous about both of these evils.

As the masses of individuals gather in squares across the world. The idea of utopia should not be discounted on the basis of sociological cold war trauma. A trauma that has left the world in two ideological camps that are not aware of their individual roles.  These roles are defined by their interaction not their conflict. The historical conflict of the Cold War, now that we are not in the midst of it, was a war where very few shots were fired while information shot like bullets, cut pathways that have linked the world indivisibly. What it was, undeniably, a conversation. Their reconciliation and not their division.  The six major divisive structures that exist in the world today are the partitions between socialism and capitalism, as well as, religion and science, followed by the gap between the rich and the poor.

Socialism and capitalism are both subsidiary to Democracy and while they are the best of the ideas of humanity their synthesis is a certainty. The decisions between these two ideologies and where they will be applied has to come through democracy.  Religion and science can only come to reconciliation in the spaces of the unknown and the unknowable, the desire to leave that unknowable beautiful.

What upsets atheists the most is the influence that is wielded by Judeo-Christian moral structures on states and their individuals. But as the lessons of the past have taught us you cannot take something away without replacing it with something else and unless you have  an eight thousand year old belief structure to put in its place then I wouldn’t  mess with it.

This influence of religiosity upon astute investigation shows that these moral memes are absolutely necessary to have gotten us here.  The moral memes that have made civilization possible should not be shamed away after the end result. The end result of believing in unreal space for thousands of years is that it now exists. Spaces exist where two people can find equality. The last gap between rich and poor is the easiest. Both have to find compassion for each other. While the middle class arbitrates instead of getting involved. Wealthy people deserve our sympathy because by getting everything you want in life it makes you somehow underdeveloped, less kind. Character and thought, for that matter, require suffering and adversity. The light that shines in peoples eyes needs to be disappointed so it can be amazed. Occupiers insist that this is a revolution of conscience but the dinosaurs can’t hear them. It is as simple as changing one’s mind.

Previous: NYPD Violates a Judiciary Order
Next: NYPD in Contempt of Court