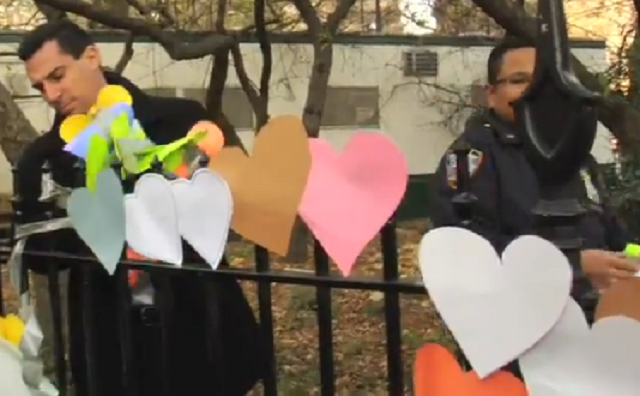 Posted by: patrickgokey December 12, 2011 in Occupy

Muriel Kane posted a great article on December 11, 2011 that we felt was worth reprinting for our weekly Motivation Monday column.

“An anti-bullying march by parents and children directed against the New York Police Department’s arrests of peaceful protesters encountered a first-hand taste of what they were protesting against when police ripped down the paper hearts the children were attempting to post at City Hall.

As described by Margaret Flowers at October2011.org,”

“We marched down to City Hall with our children eager to deliver our hearts and our message,” the account continues. “As we were not allowed onto the steps of City Hall due to renovations underway, we decided to tape the hearts onto the gates in front. We as parents watched in disbelief and disgust as the NYPD tore down the children’s artwork, ripped their hearts, and broke the children’s signs over their knees.”

The video below will hopefully provide you with the motivation you need to keep on fighting the good fight!

Previous: Podcast Interview with Corey Ogilvie, Creator of the OWS Film “I Am Not Moving”.
Next: VFP United Kingdom: Press Release