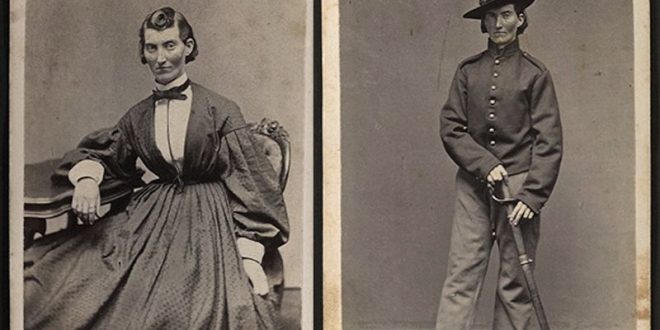 (Frances Louisa Clayton, who witnessed her husband’s death while fighting side-by-side for the Union. (Photo: Library of Congress) ) From: https://www.smithsonianmag.com

As of Friday evening the Trump administration issued a memo instituting a specific ban on transgender veterans who do need or will need surgery. It seems that gender reassignment is being cited as the reason for the promised ban. There are currently 15,550 transgender people in the military today.

The memorandum signed by General Mattis essentially overturns the Obama era memorandum that tolerated gender dysphoria as a preexisting condition and covered gender reassignment. Chelsea Manning benefited from this before she was pardoned. Current transgender service members will not be effected.

The medical migration that happens under the auspices of service does not delegitamize service. People join for fertility treatments, plastic surgery, and life saving treatment for their families. It seems that gender reassignment will not be tolerated. Transgenders in the military pale in comparison to military families as a financial burden. Not to mention that if someone joins for health care there cannot be rules put forth as to what kind of healthcare after the fact.

The most poignant argument I have found pro comes from the LA Times recounting the history of women who adopt male personas in order to serve in the military. This doesn’t speak broadly to gender identity but it does set a historical president. We can widely explain the reasons why so many woman dressed as men to serve. But like the healthcare migration we see today as much can be explained as economic migration.

Before transgender was a word, hundreds of women posed as men to serve in the Civil War. They did so capably and, in many cases, without ever being found out. Medical exams were cursory — show them your hands and feet, and you were handed a musket — and both the Union and Confederate armies desperately needed warm bodies at the front. Like other soldiers, many of these women fought for love of cause and country, and for the paycheck.

We can’t pretend to know how each of them identified from a gender perspective. Some soldiers returned home and resumed life as women, marrying and raising families. Some, like Cashier, continued after the war to live on quietly, privately as men.

But the point is that it didn’t matter: They served, and served well, and served the same as the soldiers who were born as men.

And for all the women who fought under male identities, there were many more who pushed Victorian gender boundaries by acting boldly in military capacities as spies, nurses and vivandières — also known as daughters of the regiment — who bore the flag in battle, rallied troops and cared for the wounded. The pioneering Civil War nurse Clara Barton, who traveled to the battlefield under fire to aid the sick and dying, would later go on to found the Red Cross. An ardent suffragist, she believed that opportunities in the war advanced the social position of women by decades.