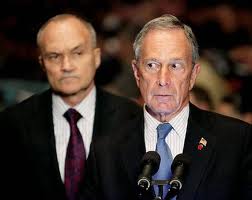 Posted by: karololesiak November 20, 2011 in Police

The first thing that I learned about the NYPD that shocked me was that they have their own intelligence department and their own people serving in the middle east as anti-terrorism agents. The second thing that shocked me, which a retired officer told me in Coney Island, was that NYPD has 34k officers.

Ray Kelly, in an interview with 20/20, declared that NYPD had the capabilities to down a plane. All these programs saw increase in the decade after 9/11. Except, of course, NYPD internal affairs.

Seven narcotics investigators are convicted of planting drugs on people to meet arrest quotas. Eight current and former patrol officers are charged with smuggling guns into the state. Another is charged with making a false arrest, apparently as a favor for his cousin. Three more are convicted of robbing a perfume warehouse.

When a group of officers was video taped acting lewdly at theEast Indian Day Paradejust four days before Occupy Wall Street began, Ray Kelly blew it off. Ray Kelly didn’t care because the NYPD has systemic corruption. Investigating something trivial like two officers skylarking in uniform while there was shootings taking place in the same area would be beneath him. Because of the events of 9/11 the NYPD as an institution has become too big to fail, too big to police.

The Thirteenth Annual Report of the Commission to Combat Police Corruption brings to light that the problem is internal affairs itself and its propensity for cronyism. John Del Signore from the Gothamist offers that their budgetary expenditure is not the problem.

NYPD Commissioner Ray Kelly defended Internal Affairs, insisting that its ranks had swelled and more money has been thrown at it, currently $66 million, up from $41 million in 2001. But funding doesn’t seem to be the problem, rather the division’s “hidebound” bureaucracy and inertia. “We don’t have anything proactive where we can sit there and think like cops and track corruption,” a former Internal Affairs investigator tells the Times. “There is no real detective work going on. Everything in I.A.B. is all reactive.”

Signore goes onto say (and I agree) that it is impossible for the police to police themselves. In closing I would just like to mention, and maybe you’ve heard it before, the NYPD is the tenth largest army in the world. Quis custodiet ipsos custodes? (who will guard the guards themselves