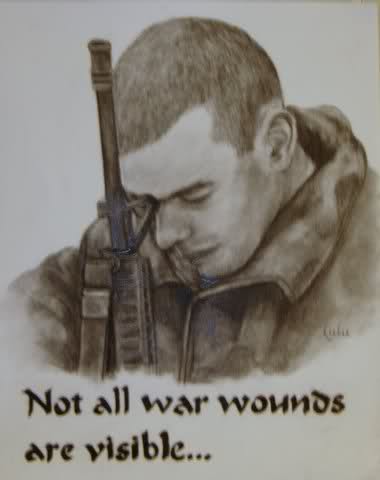 Forty-two years ago today, I arrived at Valley Forge Army hospital, my tour in Vietnam mercifully cut short by the timely affliction of pulmonary tuberculosis.  Having thus survived Vietnam, I have spent the years ever since contending with its aftermath in the form of a wound far more resistant to healing than the disease that once lodged in my lungs.

I wish I could say that my understanding of this unwelcome shadow, this discomforting vulnerability to stress and conflict forever embedded in my scarred memories of war, was in some way proportionate to the number of years I have lived with it.  But I can’t.  All the tests confirm I have it, but PTSD remains almost as much of a mystery to me today as it was when I first became conscious of how frayed my emotion had become during those involuntary episodes of weeping while I was still in the hospital.  It wasn’t the TB that disconcerted me; that had been my salvation.  Something deeper was gnawing at me, and would gnaw at me ever since.

And yet, when I consider those veteran comrades I have known from my own era, and those I hear about almost daily returning from Iraq and Afghanistan, whose postwar lives have disintegrated in acts of tragic self-destruction, I have to count myself among the lucky ones.   Did I possess some quality, or benefit from some set of circumstances, that they were lacking?  Or was the fault not in themselves, but in their stars?  These enigmas surrounding PTSD always cloud my attempts to tease out a more defined perspective on what it is, how it works, and whether my life would have been different or better if not so relentlessly shadowed by its presence.

If I said that PTSD has robbed me of the solid career my background and education had prepared me for, that would be an irrefutable truth.  In compensation, my rejection of the premise that Vietnam was a noble cause, leading to years of antiwar activism, emboldened me to challenge orthodoxy wherever it lay in my path, and to forge an independent life that rested strictly on my own talents and enterprise.

While this self-styled independence has cost me greater material rewards, it has carved a space to accommodate my PTSD in a manner perhaps less problematic than had I been more rigidly subjected to the pressures of a conventional career.  Even the PTSD-driven tendency to withdraw from society – or in the lexicon of the clinic, to isolate – has been as often as not agreeable to a writer’s solitary trade.

I won’t deny that I’ve caused my share of pain to others and stepped on more toes than I’d like to remember.  The burden I carry is thus, involuntarily for the most part, parceled out to others, friend and foe alike.  But here accumulated familiarity with harmful and repetitive behaviors has paid some dividends.  In my long and stubborn coexistence with PTSD I’ve learned that the symptoms can be managed – not tamed exactly – but kept at bay.  Things would have gone much worse for me I firmly believe, had I not committed myself over the past four decades to the old fashioned talking cure – weekly therapy whenever possible – to vent the pressures that beset me from within.

Medication has never performed the benefits for me that I have gotten from an hourly walk each day on a quiet country lane.  Intimate relationships?  Well that’s another matter.  But, in the autumn of my days, I have been blessed with a wife of uncommon charity and patience, a weekly date with a granddaughter for toddler gymnastics – and if that doesn’t make you smile, nothing will – a son close at hand, some enduring friendships and family ties, and a rescue canine to care for who distracts me from my more self-involved and narcissistic moods.  It is moreover this embrace of the small life, with ambition put to rest, that offers true nourishment and peace of mind, even as I cast a mirthful eye on a past both troubled and fulfilling.  And if I’ve been down so long it seems like up to me, so much the better.  This is what surviving PTSD looks like from where I stand today.  It isn’t perfect, but it sure beats the alternative.

First appeared at www.inthemindfield.com on April 23, 2011.

Michael Uhl’s writing has appeared in national magazines like Forbes, GEO, House Beautiful, Travel and Leisure, the Nation, and the Progressive. He has contributed regularly to the Sunday Boston Globe Book Review. Uhl holds a PhD in American Studies. He is the author of Vietnam Awakening, and is now working on a second memoir. His website is at: www.veteranscholar.com

Previous: Post Office Evicted
Next: Podcast Interview with Corey Ogilvie, Creator of the OWS Film “I Am Not Moving”.