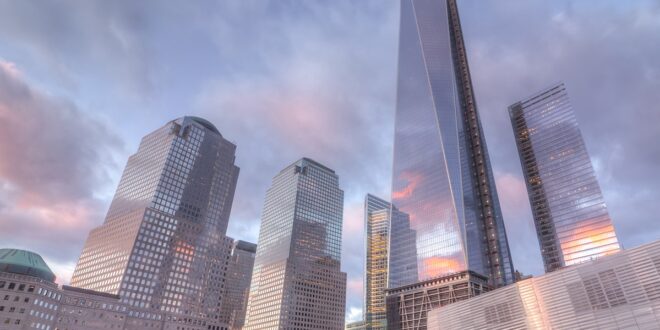 Posted by: karololesiak February 12, 2012 in History

Before racial slavery was adopted by the Europeans, there existed the serf. The serf or peasant was a modified slave. The social contract between the serf and state gravitated, ideally, in protection for the serf from outlying forces. If you live in New York you can imagine what serfs felt like when seeing a castle on the skyline. For the medieval serf the structure represented God’s rule on earth. The nobility had a divine right to rule. Outside of bodegas all over Queens, New York (where children trick-or-treat for lack of better places), the skyline is full of symbols such as the serf would have seen. As the children take candy from men outside the bodegas they also ingest the symbolism of the skyline. Only these monuments are not built to kings and their divine right.

The structures  are built as monuments to financial institutions, and the residents of today’s modern urban centers see them every time they step outside of their homes. They are cataloged as landscape and disregarded.  Chase Manhattan, Capital One, Bank of America, Verizon, modern day castles, testimonials to social Darwinism loom with supremacy. For the children of Queens the power represented in the skyline is arbitrary next to the sweetness of candy at Halloween but their relational place in the social landscape of New York is forever branded into their psyche. Living, breathing metaphors existed all around us but only a small part of the population is observant of what they are ingesting through allegorical perception.

Metaphors are the corner stones of the way we communicate. An expression of allegory forces the receiver of a message to process and reflect; even if this is inadvertent, it is meaningful. When, in September of 2001, hijackers crashed two planes into the World Trade Center they were trying to communicate in metaphor. The main vehicle is fear, but as a conceptual metaphor, it embodies elements of globalization and ant-capitalism. The acts’ authors intended to terrify the recipients of their message using the psycho-social infrastructure that the recipients were already communicating through.

In the discipline of linguistics, a large portion of the talented graduating classes every year get recruited into the cyber industrial complex, and by proxy the intelligence mainframe. Back in July of last year, a program called Metaphor was offered by IARPA (a government agency that funds “high-risk/high-payoff” research into intelligence related issues). The program allots millions of dollars to academics and corporations to analyze outlying metaphors in cultures whose ideologies could potentially be threatening to the West.

“Take the concept of ‘democracy’. If, say, Pashto speakers in Waziristan tend to describe democracy in terms of a tool used indiscriminately by a predator to beat its prey into submission, then this might help intelligence analysts understand their point of view…a legacy of the work of George Lakoff…the ‘target’ of the metaphor, an abstract concept like democracy, is explained in terms of the ‘source’, a familiar physical object or process. The analogy would often rely on some lingering ‘folk theory’ about how a process works.”

All this comes on the heels of the extension of the 2010 Winter Olympics Social Media Event Monitoring Initiative which was an aggressive monitoring program by DHS that was never dissolved.

The detection of new metaphorical threats is the search for terrorism before it happens. The DHS has been monitoring social networking with key word alarms for some time but examining cultural metaphor gets into the realm of what people think. Just because someone is culturally predisposed to have aggressions towards the west does not mean that there is any intention to act. George Lakoff’s studies in linguistics are ground breaking but the agenda with IARPA Metaphor program seems equivalent to the eugenic movement’s use of genetics. 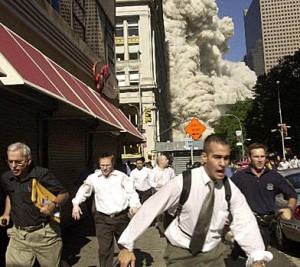 The 9/11 metaphor was the chief composite image that lead to this preemptive intelligence witch hunt into peoples thoughts. The way we refer to it should be a clue into our own thoughts. 9-1-1 is an emergency number.  The American public has a custom of looking outward without reflection, of ignoring what is in plain sight. The 9/11 metaphor is ignored. The post 9/11 thought matrix is based on not giving terrorists legitimacy. If there is no message, then it is random evil. In which case, it applies to the ideological dichotomy of good and evil. Instead we have come full circle to exploring every other metaphor other than the one that made us this afraid in the first place.

The metaphor of the skyline changed after 9/11. It changes on a foggy day in New York. When the skyline is not visible, a level of disorientation ensues. But when two iconic buildings have not been visible over the last decade something changed violently in the public mind. Metaphors rely on the exaggeration of a part of the image to communicate an idea. When the Twin Towers disappeared, the absence accentuated lucidly what is in our peripheral. What we have been ignoring. To what purpose these monuments have been constructed for.

The trick-or-treating kids in Queens do not know that the bank buildings connote power but I am sure they suspect. There are many tenants to the 9/11 metaphor but I believe that the skyline is the most prominent in the groupthink of our countrymen. It is a daily reminder. White space, it is the absence of metaphor or the apathy towards it. Depending on where one is standing in the city, skyline can orient or disorient. In medieval Europe the same would have been true. The skyline represented power, but more importantly, it represented security, identification with the master state.

Our skyline shows us that state has been sold to the highest bidder. In modern day New York an individual observing the skyline will see one thing consistently illuminated: letters representing finance.  The buildings that represent public interest have been overshadowed by interest of non-entities with their own legal sources of legitimacy. A corporation is an individual in the eyes of the law. Is this what we traded monarchs for? Non-entities? That in itself has metaphorical meaning that I will let the readers decipher for themselves.