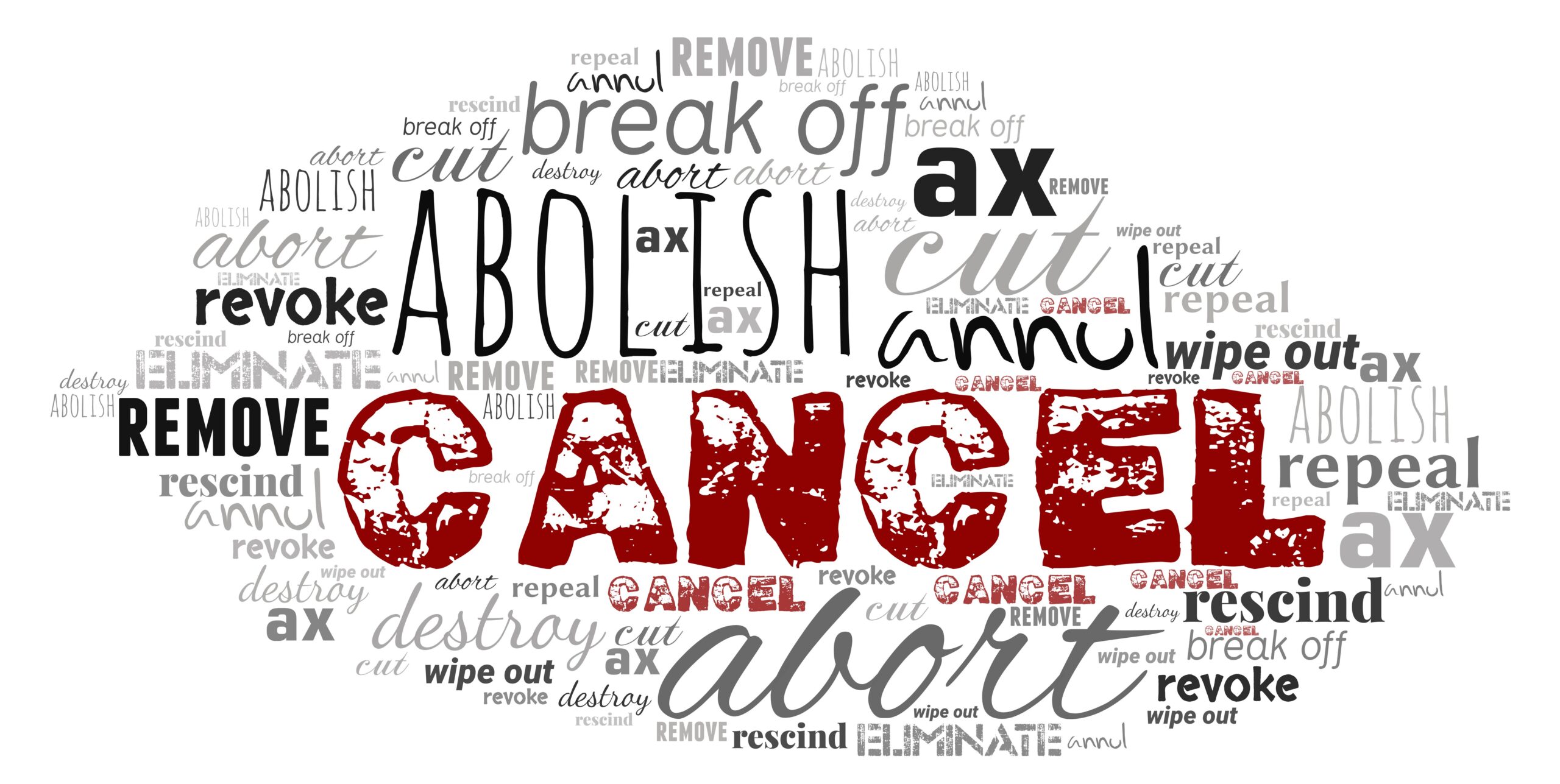 We here at SFTC are a product of cancel culture.   We were canceled early on when Google took away our advertising in 2011 because we were criticizing the police and financial sector. Facebook is presently canceling on us by not allowing us to promote articles that are critical of the police or might influence the November elections.

We decided to not raise money through advertising early on and I believe that it was a good idea. There are many people who have come together to protest something they identify as cancel culture. For us hegemony only has the power to cancel. A claim of cancelation is a clever trick when the offended party is the ruling class. When the Philadelphia Inquirer ran the headline amid the George Floyd Uprisings: “BUILDINGS MATTER, TOO” the editor lost his job and that is the kind of meta cancellation we support.

Glenn Greenwald in an op-ed for the Intercept describes cancel culture as mostly the weeping of elites which I can accept even though we were canceled. He goes onto list legitimate examples. A sure-fire way of getting canceled is criticizing the military. Which you think wouldn’t be a problem for us but if you want to hear a story of cancel culture and the military look into the story of USS Liberty.

It’s hard to garner a lot of sympathy for someone being canceled for a bad opinion whether that be about the transgender community or women or race. Middle America is always behind the learning curve for what is culturally acceptable. There were those who were on board for LGB fell off when the T was added. The most vulnerable group is also the biggest trigger for conservatives and libertarians. Trump’s ban on transgender in the military was a signal to that demographic.

People who say ‘you just can’t say that anymore’ never had that much to say, to begin with. Right-wing conservatives are canceled at colleges because they are not very academic. Academia is liberal and that is not conspiracy unless reality is a conspiracy. I am kind of angry that John Woo author of G. W. Bush’s Torture Memorandum is teaching at Berkley. Not enough of the parties associated with false casus belli WMDs were canceled after that era.  Conservatives aren’t cancellable as proven by Alex Jones.

There is an expectation of escalation and a projection of irredeemability on behavior. Shaming is the most powerful social engineering tool we have in our apparatus. Another way that I’ve heard this identification of cancel culture being described is that people are just too politically correct these days. Is it even possible that that’s the case? A nostalgia to a time where things were taken care of outside of the spectacle of the surveillance of punishment seems to emerge.  There are a lot of opinions held that have no more place in modern discourse than flat earth does. I think the majority of people even if they’re racist try to hide it. Perhaps when the Cato Institute says that 62% of Americans are afraid to share their political opinions this is why.  Many people who voted for Trump don’t publicly endorse him.

The silent majority is term coined by Nixon to describe that 62%. One of the big ideas in the Southern strategy was that racism wasn’t real because we were living in a post-racial society. A post-Obama society made a lot of new things permissible. This was Roger Ailes advice as to which platform to push for Nixon. In that sense, it’s an attempt to cancel racism. I see a lot of things that scare me and the fervor from the left but so-called cancel culture is not one of them. Mob mentality has always scared me in the modern context this is a hive mind from some anonymous message board but this was never the mob mentality of a conglomeration of ANTIFA white knights.

I find the language of decolonization troubling because it commodifies postcolonial theory into something actionable. Creating a postcolonial crusade misses the point. Marianne Williamson spearheading a movement for reparations would be the closest thing an actionable postcolonial idea but I don’t think that that’s something America’s ready for. One of the greatest things to come out of this country was the abolition movement canceling the largest police state in the world is paramount to fulfilling that legacy. Before there can be reparations this country has to be safer for the most vulnerable. That is why the cancelable amateurish biologist opinions about trans folks make the world less safe for the vulnerable. Sometimes safety is material and many other times it is meta.

It always amazes me how much intelligence and good opinion have nothing to do with each other. Some of the smartest people have some of the shittiest opinions. I think education is so fragmented and specialized that we miss the general Neoplatonic spirit of educating good opinion. The pedantic initial question of whether such a thing exists usually comes from the alt-right or hard bio materialists.  It’s not just good opinion that there is such a thing as good opinion but it is the trajectory that we have been launched from into a chasm of being consciousnesses. The second pedantic question: as to the nature of good — a sophomoric lawyer will charge. It’s only when we’re faced with the idea of radical evil that the proposition of good interest us, by then it’s too late.

I’ve often had waking nightmare scenarios where Minority Report is the strongest metaphor to describe the cancel culture that emerges out of an unpopular tweet leading to a disenfranchisement. But some of the pundits being canceled oftentimes resemble disinformation agents themselves spreading untruths. People like Alex Jones have been in the public culture for a long time (He was in the movie Waking Life) They serve to radicalize people because the message is streamlined and unsophisticated. Infowars presents itself as intelligence disclosure but propagating people like Ted Gunderson Alex Jones allies himself with satanic panic. I am always faced with this value judgment between conspiracy and incompetence. Pizza Gate is an extension of satanic panic and ritual abuse conspiracies propagated by Gunderson as a former FBI head.

But here’s another scenario: the 2011 Norway attacks where  Anders Behring Breivik defines his enemies as liberal Marxist elites and issued two attacks that killed 77 people and injured 209.  Anders Behring Breivik considered his country’s labor party to be traitorous because of immigration policies— one big complaint was forced diversity.  He got his wish — his point was legitimized — his bad opinion laid beside good opinions and fundamentalized — his sanity never interrogated. Radical evil has consensus: to label it’s opposition as evil. To Breivik Marxist was a slur. The way that anarchist is a slur being used U.S. State Department.

When I heard Berry Weiss label the propagation of BDS as antisemitism — I could see how this could radicalize against activists who include Jews. Providing platforms for people who compromise safety is cancelable. The Israeli state is not cancelable. The Israeli State cancels. The discourse that needs to happen and never does completely is about embedded journalism and intelligence. I find American multiculturalism vapid, and can’t talk about it, but that is more because of the propensity for commodity fetishism. The way we also commodify and weaponize information is the problem but that reaches into something fundamentally flawed in the way capitalism makes us all worse people. Greed might be good but it’s ugly.

Censorship happens least to the well established but exercise of free speech does not require reflective thought under an umbrella of enlightenment values. For us the only relevant renaissance is the San Francisco Renaissance where Foucault gave talks at Berkley about the spectacle of surveillance of punishment. If I were to isolate a fundamental of discrete censorship from the hegemony (or rather its spirit) it would a spirit of conservative obstructionism where new ideas can’t get past old opinions. Refusing to adhere to someone’s wishes of identification via pronoun usage as a personal epithet of protest is harmful.