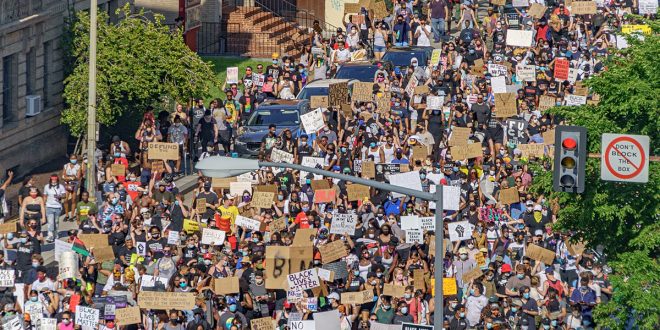 Crispus Attucks was the first American to die in the revolutionary war. It is debated whether he was a freeman or a runaway slave. Adding nuance to what motivated early colonists. Many revolutionaries were abolitionists; the marriage with the slave-owning South came later.

George Floyd like Crispus Attucks was a catalyst that hopefully will usher a revolution in policing. When court TV reported that Floyd had tested positive for fentanyl it eclipsed that he had COVID like an atomic fact. Yet, the results of his drug test cannot be viewed as relevant to anything that happened on that pivotal day. American ableism disguised as moralism bears a shadow where voices echo for the drug testing of welfare recipients. One of the elements of blowback from the war on drugs is the profiling of disabled and sick people as intoxicated.

The killing of George Floyd marks an axis shift of  public health where being sick or disabled is criminalized and dismissed as related to drug abuse as operating procedure. When Floyd’s daughter spoke at his funeral in Houston she said that her father loved Le Bron James and expressed the power of shared victories. The first thing Floyd told Chauvin is that he had COVID and the first question the officers asked him was whether he was on something. There is no framing the debate outside of the context of pandemic. Chauvin’s restraint was aware of the virus in Floyd’s lungs.

The one glaring thing that is coming to light in the investigation surrounding the death of George Floyd is that police that responded to the shop owners call had no procedure in place to deal with a sick subject during Memorial Day pandemic. Blue Lives Matter apologists reference that as more videos come to light George Floyd was saying that he couldn’t breath long before he was taken to the ground and a knee was placed on his neck. This however, illuminates that George Floyd had COVID and was using some counterintuitive logic where smoking might give him temporary relief. COVID is also being reported in causing delirium.

The only training that officers receive is to be on the lookout for something called “excited delirium” where a subject suddenly attains superhuman strength and can be  danger to himself and the officers. This was also the justification  for the beating of Rodney King and L.A. Riots that followed in the 1990s. We say that someone is innocent until proven guilty but the emphasis on officer safety over officer incrimination is reflex.

HIV in the 80s hysteria changed policing and suddenly a courtesy question appeared: ‘do you have anything sharp in your pockets that could jab me?’ Heroin and intravenous drugs had existed before HIV. The pocket check is justified and rationalized as an officer safety check for weapons. Derick Chauvin knew that George Floyd had COVID and reframed the situation putting officer safety at the forefront. While the shopkeepers call was about counterfeit money the fact that it was on Memorial Day during a pandemic should provide context. The case will be made about Chauvin’s adherence to procedure but there was inappropriate procedures in place which is an indictment of policing as a whole.

Previous: When to Mask: A Personal Essay
Next: Watch: The War at Home