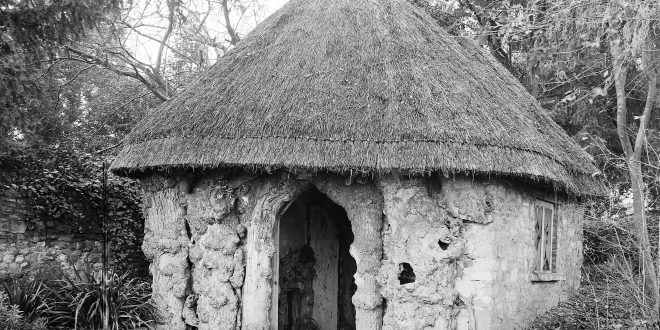 M0003266 Temple of vaccination, Berkley, Gloucester. Credit: Wellcome Library, London. Wellcome Images images@wellcome.ac.uk http://wellcomeimages.org The summer house in garden, Chantry, Barkeley, Gloucester, home of Jenner. This became known as the 'Temple of Vaccination' as in it Jenner did many vaccinations during the summer months. Front view with door open. Published: - Copyrighted work available under Creative Commons Attribution only licence CC BY 4.0 http://creativecommons.org/licenses/by/4.0/

The Biden administration is rolling back it’s projections for majority vaccinations by July. The hope of Herd Immune Christmas, while emblematic, is not looking realistic with reports that two major vaccines’ effectiveness is halved against mutated strains.

We need a new different way to vaccinate people that doesn’t put the vulnerable at risk. There has already been a detrimental shift to vaccinate people by age (65 and over) thus ignoring anyone at-risk under that age. There was also a failure in conducting the census by the last administration which will impact vulnerable communities. I propose we combine the two and in the process provide new jobs. Why can’t we use AmeriCorps to take census and facilitate door-to-door vaccinations?

“AmeriCorps is a voluntary civil society program supported by the U.S. federal government, foundations, corporations, and other donors that engages adults in public service work with a goal of “helping others and meeting critical needs in the community. “Members commit to full-time or part-time positions offered by a network of nonprofit community organizations and public agencies, to fulfill assignments in the fields of education, public safety, health care, and environmental protection. The program is often seen as a domestic Peace Corps. It employs more than 75,000 Americans in intensive service each year.”

The National Guard has already been over deployed and public trust has deteriorated: needing to be regained. It is a grave mistake to offer a military response when other resources are available and more appropriate. Just as we are now realizing the absurdity of the war on drugs this should serve as grounding to illustrate why having a war on anything is counterproductive.

A euphemism for the vaccination shot: “the jab” is an intramuscular shot. Those of us that have served understand that you can teach a young person to jab under supervision. After so many young people have missed paramount segments of their educational & development, this lesson in civics could produce a new class of citizen sorely needed by our society. I suspect that this was the aim of the program from the onset.

Per the CDC’s instruction on administering vaccinations: there are various age and immunity variations that need specialized decisions that can be made by a supervisor, but the people that are standing in lines with appointments for vaccinations are profileable. Spreading the disease further in a rush to attain herd immunity when the vaccinations are yet to be seen to deal with mutations is folly.

It is widely being argued in California that we should provide at least segmented mobile vaccinations to at-risk populations, but the door-to-door idea can be stretched further than that. Essential workers should be vaccinated at their workplaces to ensure the continuity of their essential work. Any vulnerable population that should not be moved can be accommodated by AmeriCorps in my scheme. And in the process you could provide a valuable education to youth that are in need of a purpose.

I am not suggesting abandoning vaccination sites just supplementing them with accommodation that the federal government mandates of itself and anyone that takes government money. While we all need to acknowledge that lining people up in one location in order to vaccinate them might be a thing of the past. We need to also acknowledge that anytime a laymen talks about herd immunity it is spoken from a place of ignorance.

It is very possible that we are in an age of plagues, at the very least, in an era of searching for an appropriate vaccine since mutations are already cutting effectiveness in half. Vaccine scarcity is an obvious misnomer — vaccine distribution is assuredly the culprit — there is whisper of vaccine equity but what is needed is vaccine affirmative action.

Door-to-door vaccinations should only be the beginning. The Trump administration meant to send care packages to every household at the beginning of the pandemic and abstained because of stated fear of inducing panic. Something like that is needed now to make the populace trust in the government again or perhaps for the first time. Masks, thermometers, blankets, perishable foods.

Previous: Watch: The War at Home
Next: Movie Review: Outside the Wire (Stop Killer Robots)