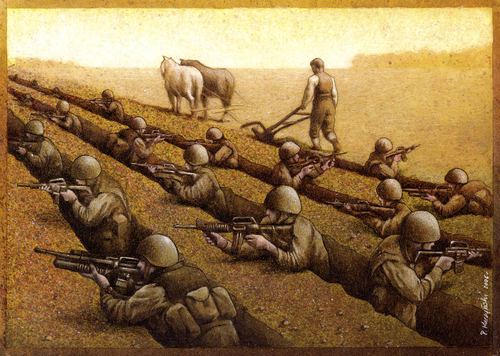 Don’t Allow the Stage to be Set for Violence

There are reports circulating that up to 20k American troops will be deployed to quell civil unrest, in America. Is there any doubt this will be in cities such as New York?
Do I need to spell out in large letters what a bad idea this is? I think not, but I will give my opinion.

The United States already has mechanisms in place to address civil unrest within its borders. We like to call them Police Officers, we like to call them the National Guard.
The only thing you can possibly call 20k trained troops in the US for the purpose of quelling unrest is an escalation. The elements of martial law are already being put into place, if not in name, at least in actions.

Let’s not be quick to start pointing fingers at our most recent president. Even though you could. The powers that be are worried, things are falling apart, this president was just the last straw.
What good could possibly come from trained soldiers patrolling American streets, none, no good can come of it.

Look at Egypt, look anywhere where there is a government/military presence and the people rebel. Soldiers are supposed to protect and defend democracy not force it into dark corners.
How are the American people supposed to react, are they supposed to just shrug their soldiers and accept that the soldiers are there for their own good, for their protection, that’s what we’ve been doing for decades.

We have lived in a world of fear since the 1940s. We have been on our toes and instead of questioning actions we defer to our elected leaders. Don’t forget that, we elected them, we gave them their power, we never questioned.

I propose now, nay, I demand now, that we begin questioning, that we begin once again participating in our democracy. Contact your elected officials, every one of them, by phone, by letter, by any means necessary and tell them that we don’t want troops in our streets, that the only possible outcome is either violence against the people or violence against the military, and either of those outcomes will be disastrous to democracy, unwarranted deaths will ensue, not by design but through the situation.

Americans are an independent people, the idea of forceful government control sets Americans to action, but let us take action using the tools we have before the weapons roll down the street. Because when they do, these protests will no longer be peaceful, they will be massacres. There is no way to defend against a trained military force.

We already know what happens in civil wars, we all lose.

Matthew Baker is a veteran of the United States Navy and was stationed aboard the USS Ronald Reagan from 2002 to 2006. He holds a Doctorate in Education from the University of Oklahoma. Baker has worked as a reporter and photographer for The Purcell Register in Purcell, Ok, and is currently teaching English and Journalism to high school students in Norman, OK.
Previous: Shills, Shills Everywhere
Next: Egyptian Government Using Toxic Tear Gas